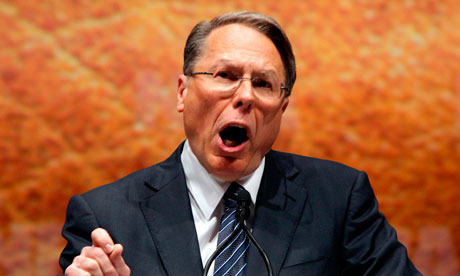 I know the title of this article sounds like a conspiracy theory. And that bothers me, because I hate conspiracy theories. And as a Christian, I believe it’s a great sin to assign false motives to someone else. It’s effectively the sin of slander and bearing false witness. I can’t help but see the devil in such false accusations as, “Obama wants to take all of our guns,” when Obama has said no such thing, and “Obama wants to be a dictator,” when he has indicated no such thing, and my favorite, from the comments section under a 2014 Mike Huckabee Facebook post is, “Obama wants to give us all Ebola, so he can declare Martial Law.” So I’m hesitant to assign motives to the NRA, but their actions are leading me toward one conclusion, and one conclusion only – that the NRA wants criminals and terrorists to have guns, so the industry makes more money at the expense of innocent lives.

For most of my adult life, I assumed that the NRA was just an organization of gun owners that represented their interests, and nothing more. My mom was an NRA member, and when I bought my parents’ house after she passed away in 2000, I had no intention of removing the NRA sticker from the sliding glass door. But when NRA president Wayne LaPierre propagated the rumor that Obama was coming to take all of our guns, even though Obama never even suggested so little as a ban on the further sale of assault rifles, I got suspicious. And then the NRA proceeded to oppose every one of the president’s common sense gun regulations, no matter how little those regulations would have intruded on the rights of gun owners. But that’s not what led me to first suspect the NRA wanted criminals to have guns. It started with something that predates Obama.

During the tenure of Pennsylvania Governor Ed Rendell (2003-2011), the governor promoted legislation in PA that would limit an individual’s ability to purchase a handgun to one gun per month. They could buy 12 guns per year, but only one per month. The reason for such a proposal was that some people without criminal records would buy 10 or more guns at a time, take them to crime ridden areas, and sell them for profit to ex-convicts who could not legally buy guns on their own (about 40% of guns used in crimes were purchased legally but then used by someone other than the purchaser to commit the crime). The intent of the bill was to keep guns out of the hands of violent criminals. So how did the NRA and their Republican puppets in the legislature respond? You guessed it. “The NRA killed the bill in committee. It never even got to a vote,” said Rendell in his book, “A Nation of Wusses.” So the next time you hear the NRA and the Republicans say they can’t do anything to limit gun violence because Obama is just too ineffective and divisive as a president, remember that they’ve opposed common-sense, un-invasive gun laws at the state level, too – a place outside of Obama’s jurisdiction.

When you consider how little negative impact such a law would have on a law-abiding gun owner, you have to ask, “How could anyone be opposed to such a law?”

The worst that could happen to someone who wanted to buy multiple guns for their own or their family’s sake would be that they have to wait a little bit, just like someone who gets a learners’ permit to operate a vehicle has to wait to get their license. Clearly, the NRA opposition to such a bill has nothing to do with denying the constitutional rights of a gun owner or laying a heavy burden on that person. The only logical conclusion then is that the NRA wants criminals to have guns, especially when you also consider the NRA’s fierce opposition to requiring gun shows to do background checks and their refusal to deny gun and ammo sales to terrorist associates already denied the right to fly on all American airplanes. The level of inconvenience these laws would cause is minuscule compared to the value of the lives such a law would save.

NRA supporters might make the tired old argument that passing such laws would be a “slippery slope” toward the abolishment of gun rights. But such an argument is invalid. First, there is never an excuse to do the wrong thing, especially for Christians. Second, it’s not as if passing such sensible laws would somehow prohibit pro-gun congressmen from being allowed to vote against future laws that might actually infringe upon gun-owners’ rights. Third, the “slippery slope” argument is simply the argument extremists make when they know their position is evil, but they believe the position of the extremists at the opposite end of the spectrum is even more evil, so they oppose the righteous solution that lies in the middle, because they fear that any compromise on their part might be seen as a victory for the opposite extreme. Again, this is never an excuse to do the wrong thing.

The final piece of evidence that has led me to believe that the NRA is more desirous of criminals and terrorists having guns than they are concerned about the “slippery slope” is Mike Huckabee’s quote in response to the Charleston church shooting, when he said, “The one thing that would have at least ameliorated the horrible situation in Charleston would have been that if somebody in that prayer meeting had a conceal carry or there had been either an off duty policeman or an on duty policemen, somebody with the legal authority to carry a firearm and could have stopped the shooter.”

Remember, this was a 10 person Bible study meeting on a weeknight. Hiring 7-day-per-week security isn’t in every church’s budget (and not all Bible studies are on church property), so, effectively, Huckabee’s answer to gun violence is that tens of millions of Americans (at least 1 in 9) should carry guns on them at all times to protect themselves from mass shooters. If Americans heeded Huckabee’s words, the weapons industry would make billions of dollars from all of the people buying guns to protect themselves. Of course, the number of accidental shootings resulting from so many casual gun carriers would most likely number in the thousands, and so would the number of shootings by casual gun carriers with quick tempers. And because of the latter group more people would then have to arm themselves for protection. That’s a glimpse of what a guns-everywhere society looks like.

As a Christian gun owner who once favored the NRA, I now have no choice but to oppose it. We’re talking about innocent lives here, and the NRA getting its way will destroy thousands more of them per year. And their motive is quite simply…Money! The gun industry had been losing ground in recent decades as younger generations have found more interesting things to do than sit in the woods hunting animals, so the industry has to find other sources of revenue. Spreading lies to drive fear among those who still love guns has been their most lucrative marketing strategy.