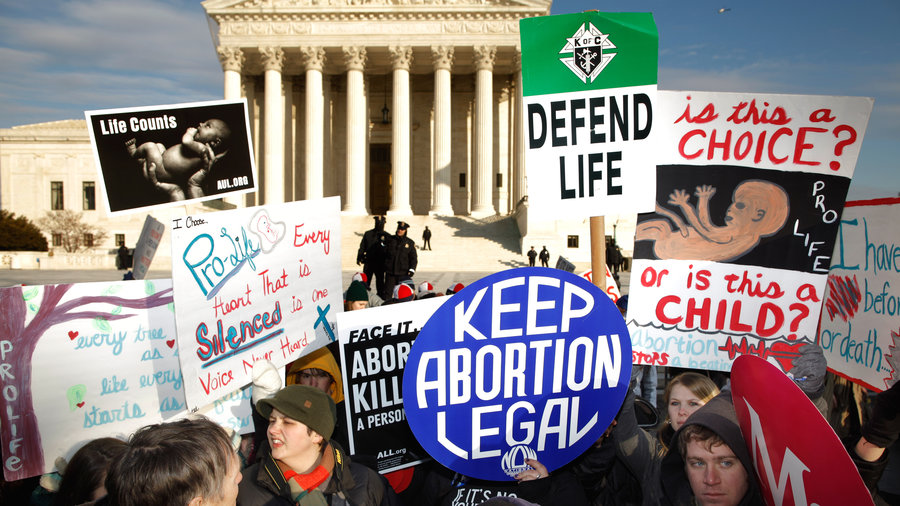 Below are several pages of short anti-abortion arguments that I wrote during the COVID-19 stay-at-home crisis. I encourage you to print these and distribute them to anyone you know FREE of charge, either in their entirety or by picking the ones you like best (you may also include them in literature you create yourself, although citing my name on the quote would be preferred).

Pro-Abortion Argument: As a man, who are you to have an opinion on abortion?

Anti-Abortion Response: I am a former fetus who thinks my life and my relationship with my mother are far more valuable than my mom having had the right to kill me. (And, personally, I am a former fetus born to a 15-year-old mother, four years before Roe v. Wade. The illegality of abortion at the time may have saved my life!)

Pro-Abortion Argument: Stop calling us pro-abortion. We are pro-choice. We think abortion is a terrible thing, but we believe that having one should be the woman’s personal choice.

Anti-Abortion Response: Apply this reasoning to any other terrible thing, and it’s clear how bad this reasoning is. For example, “We think drunk driving is a terrible thing, but we believe that killing someone with the car should be a driver’s personal choice” is an argument hardly anyone would accept. It should never be anyone’s personal choice to kill or hurt someone else, especially children. Terrible things like drunk driving are illegal, because those of us who might be victims have a voice, unlike the children in the womb.

Pro-Abortion Argument: You are being deceptive by calling fetuses children.

Anti-Abortion Response: Merriam-Webster includes fetuses in the definition of the word “child” ( i.e. the phrase “pregnant with child”).

Anti-Abortion Response: “Choice” is not more important than the well-being of those your choices hurt.
In fact, nearly every legislative debate pits one person’s right to choose against another person’s right to choose. Two decades ago, the debate was over the right for people to smoke cigarettes wherever they chose vs. other people’s right to not breathe that smoke. This is even true when it comes to more obvious crimes, such as the right to choose whatever car you want vs. the right to not have your car stolen by someone who wants it. To simply proclaim your right over and over without giving any consideration to those your rights might harm is pure selfishness.

Anti-Abortion Response: Most single-issue anti-abortion voters ARE women! Many of these women are staunchly anti-abortion, because they felt something special when pregnant – that the fetus was alive. They are not anti-woman. In fact, half the fetuses they long to protect are female.

Pro-Abortion Argument: What gives men the right to legislate our bodies?

Pro-Abortion Argument: Government cannot tell women what to do with their bodies.

Anti-Abortion Response: An abortion ban would not tell women what to do with their bodies. Rather, it would prohibit doctors, both male and female, from intruding upon a woman’s most private area with cold, hard instruments and crushing or tearing apart her child. There are many procedures that doctors have been prohibited from performing, even at the patient’s request. That’s why Dr. Kevorkian was convicted of murder for complying with patients’ requests for suicide assistance. The main difference between assisted suicide and abortion, of course, is that aborted children never asked to be killed.

Pro-Abortion Argument: How would men like it if the government told them what to do with their bodies?

Anti-Abortion Response: Millions of men did not like it very much when “the government told them what to do with their bodies” by drafting them into the wars in Japan, Germany, Korea, and Vietnam. These men’s bodies were placed in the way of enemy bombs and bullets, as they witnessed the horrors of death for days, months, and years on end. Women, on the other hand, have had the privilege of never having had their bodies forced into harm’s way by the government.

Pro-Abortion Argument: How would men like it if the government made them get vasectomies?

Anti-Abortion Response: Unlike an abortion ban, mandatory vasectomies would be a true example of the government forcing a medical procedure upon citizens. It would force all men, regardless of their behavior, to suffer pain and risk medical complications (it would also make Americans go extinct). Likewise, mandatory immunizations (which are a good thing) are yet another example of government-forced medical procedures on our bodies. An abortion ban, on the other hand, forces no medical procedure on anyone. Rather, it just allows nature to take its course and complete a process the pregnant woman already initiated.

Pro-Abortion Argument: Why don’t you leave pregnant women alone and hold the men who impregnated them accountable?

Anti-Abortion Response: States do hold men accountable by requiring that they pay child support, while counties employ entire teams of people to enforce the collection of it. The men are not given a second chance to undo their mistake, like women are by means of abortion. This double standard sends the message that women are less capable of taking responsibility for their actions than men are.

Anti-Abortion Response: This is about the only good argument legalized abortion advocates have, because it actually shows concern for people rather than simply advocating the selfish right to kill a child.
In the 1960s, prior to the legalization of abortion, approximately 200 American women died annually from illegal and self-induced abortions. However, the U.S. did not have WIC and crisis pregnancy programs, like it does today. These programs should eliminate the financial reasons for abortions. So, in the event that abortion were made illegal again, the only women risking their lives by means of illegal abortions will be those who have embraced the teaching that career and societal status are of far greater importance than bearing, raising, and loving human life.

Pro-Abortion Argument: Abortion is okay, because a fetus is not a baby. It is not conscious; it does not know it exists; and it feels no fear or pain.

Anti-Abortion Response: Likewise, according to neurologists, once babies are born, they are incapable of conscious thought prior to five months of age. And even after that, they still lack fear for a few more months. Therefore, from the perspective of the child’s experience, there is little practical difference between that of a 2nd trimester fetus and that of a 2-month-old baby. Neither one has any clue that it exists as an individual.
If you were to place a handgun to the forehead of a 2 month old baby, it would have no thoughts or fears; and if you were to pull the trigger, the pain it suffers would be over much faster than if it had been killed in an abortion procedure. Yet somehow, we live in a society that will jail a mother for decades if she kills her baby, while punishing no one at all for killing her baby while it is still in the womb.

Pro-Abortion Argument: Nearly 50% of pregnancies end in miscarriages. So, what does it matter if women have abortions?
Anti-Abortion Response: That’s like saying, “Exactly 100% of human lives end in death. So, what does it matter if people commit murder?” The sin of murder is not that you cause someone to experience death, which they will eventually experience, anyway. The sin of murder is that you “choose” to take away the life of someone whose natural time to die has not yet come. That’s why abortion counts as murder, too.

Pro-Abortion Argument: An abortion decision should be between a woman and her doctor, because health care is a personal issue.

Anti-Abortion Response: Killing is not health care. It is the opposite of health care. Likewise, pregnancy is not an illness, injury, or disease; therefore, no cure is needed.

Pro-Abortion Argument: Stop forcing your religion on me.

Anti-Abortion Response: Abortion need not be a religious issue (the Bible never mentions it, specifically). Abortion opposition makes logical sense to anyone who believes that no individual should ever have the right to take away the life of another individual for any reason other than self, public, or national defense. If you are glad your mother didn’t abort you, it’s hypocritical to support the legalized abortion of others.

Pro-Abortion Argument: How can Christians call themselves pro-life and turn away refugee children?

Anti-Abortion Response: Indeed, many Christians have made the mistake of closing their hearts to refugees, simply because the Republican Party taught them to do so. The truth is that neither Democrats nor Republicans are truly pro-child. And that’s why we Christians should never let left or right teach us right from wrong. The Bible alone should be our moral guide.

Pro-Abortion Argument: Why do anti-abortion activists falsely accuse us of wanting to legalize third trimester abortions?

Anti-Abortion Response: Because anyone who argues, “My body, my right,” effectively advocates the right to abort a child until the moment of birth.

Pro-Abortion Argument: Behind millions of successful women are abortions they do not regret (from a sign at the Women’s March).

Anti-Abortion Response: The word “successful” is rather subjective. If you think that bringing life into this world is success, then you will never kill your child, even in the womb. On the other hand, if you believe that having degrees, prestigious titles, and power over others is success, then you will kill the child in your womb if its life stands in the way of your goals.
One’s definition of success is determined by where one’s values are rooted. And the values of corporate success are rooted in greed and pride – two things the Bible repeatedly condemns. Meanwhile, the values of motherhood are rooted in love. But even if we set aside values and look at this from a practical perspective, motherhood is still the better choice.
Motherhood: Your children and their children will miss you long after you’re gone.
Career: Corporations will quickly forget about you and move on.
Motherhood: Bearing children usually results in loyal, lifelong relationships.
Career: Corporations will replace you with a machine if it saves them a dollar.
Motherhood: Raising children gives nearly all women something to be successful at (and feel good about).
Career: Corporations offer “success” to few women (and men), because there are not enough prestigious job titles to go around. Most jobs are menial. So that leaves most women with little “success” to get excited about. And even if you do have a prestigious title, it won’t make people love you. Your subordinates are more likely to resent you than admire you, especially if you talk down to them. And if you expect your peers to praise you for being better than they are because of all you’ve accomplished, you will be the one they love to hate. So, unless you are an entertainer, most people won’t care about your career successes 1/100th as much as they care about their own mothers.