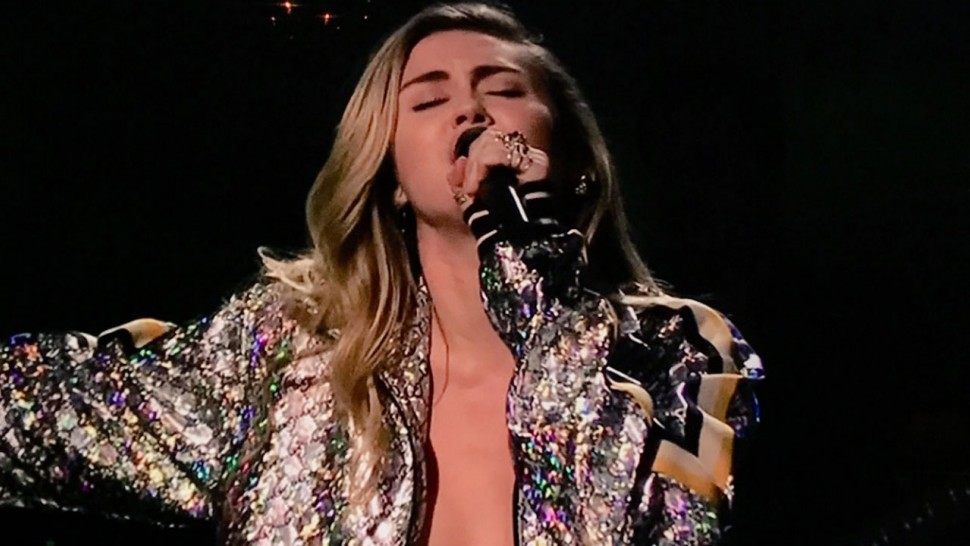 Flaunting your body – how it’s harmful to others.

Nothing says Christmas like America erupting over Miley Cyrus wearing a revealing outfit on the Christmas episode of Saturday Night Live. In fact, the outfit wasn’t just revealing; it was absurd. Nobody in public wears a coat with no shirt underneath. You wear a shirt first, then, if it gets cold, you add a coat. Obviously, Cyrus didn’t dress this way for the warmth. She dressed this way to create controversy and to turn people on sexually. It’s yet another case of flaunting sexuality to earn oneself undeserved money, fame, and glamour that one’s talent alone (or lack, thereof) could never attain.

While Cyrus’s antics appear obviously wrong to some of us, many others, particularly feminists, support her move, as they have for so many other body-flaunters in the past. They usually say things like, “She’s a woman who should be free to do what she wants,” or “What’s wrong with showing the beauty of the female body?” or, “She isn’t hurting anyone, so stop restricting her.”

The truth, however, is that she and other body-flaunters have hurt a lot of people. No, not by means of physical violence, but let’s not be simpletons about this. Sometimes, you need to look a little deeper to see how people are hurt emotionally, and we need to do that right now. Here are a few groups who are hurt by women who flaunt their bodies sexually in public.

Other Women: Who gets most upset about women flaunting their bodies? It’s not men; it’s women! Many women, especially those who are married, feel they should not have to compete for their husbands’ attention, sexually. These women have a righteous jealousy, because their husbands belong to them. Therefore, they become frustrated when other women in public media, such as television, movies, music, and mainstream magazines endlessly invite their husbands to lust for them instead of their wives. Not only are wives emotionally hurt by the mental attention their husbands devote to these other women, but they also fear the body-flaunters will cause their husbands to become dissatisfied with their wives’ aging, expanding, or otherwise imperfect bodies and seek a woman who can provide for them the raw sexuality that body-flaunters bombard them with.

When I’ve shared this reality with feminists online, the response the feminists usually give me is that those women have no right to be insecure and need to get over it – if they can’t keep their husbands satisfied, that’s their fault, not the fault of women who flaunt their bodies. I find this ironic, because I thought feminism was supposed to be pro-woman. It turns out that this particular brand of feminism actually hates women and is nothing more than selfishness and rebelliousness disguised as a noble cause.

Wives are not the only women hurt by the body-flaunters, however. Even single women who are looking for a man have expressed significant frustration with their antics. Women who possess integrity seek to attract a man by appealing to his heart and mind, and they feel it’s cheating when other women, who lack integrity, go right for the guys’ crotches.

Adolescent Boys: Regardless of what feminists and conservative Christians might tell us, it’s a psychological, biological fact that most men are visually attracted to women and their bodies. That’s normal. However, that visual, physical attraction is to go hand in hand with relationship. Blending physical attraction with a personal relationship keeps everything in balance. But what happens to adolescent boys in America today (and for the past half century) is that before they’re old enough to date and have those personal relationships, women on TV, the internet, and the magazine rack are calling for them to lust for their bodies while offering no possibility of relationship. These women promote themselves to these young men as mere sex objects, since they have no interest whatsoever in even getting to know them, personally. This causes a distortion in a man’s sexuality and leads him to overemphasize lust for the physical body in his mindset toward women. Granted, not all men are affected by this. Some have fewer hormones than others, while some have no interest in women at all. Nonetheless, the public body-flaunters serve no good purpose in a young man’s sexual development.

Young Girls: While enjoying New Year’s Eve at a friend’s house a couple years ago, my friend called me into the room where the TV was and said, “Scott, look at Mariah Carey. She’s got her a** hanging out. Doesn’t she care about the impact she’s having on young women?” Now you might think that my friend is some sort of devout Christian prude. That’s not the case. First, he’s not religious. Second, we went through puberty together and he was very interested in women’s physical bodies displayed in the public media, as was I. Today, however, he’s the father of two daughters who will soon reach the age where they might be tempted to expose their bodies sexually in public, especially if they want to be like the entertainers they idolize. Mariah Carey wearing a thong-swimsuit-dress (another absurdity) on New Year’s Eve in Times Square, where temperatures were in the 40s, can have nothing but a negative influence on young women.

You would think that in the age of #MeToo, where we condemn the pressuring of women to do what they do not want to sexually, we would rebuke those who create environments that pressure young women to flaunt their bodies in order to be accepted. Many of them, when they first do it, are uncomfortable, but they feel that they must, not only to compete with other body-flaunters in attracting men, but also to impress women who only respect sexually-rebellious behavior. Women like Miley Cyrus try to make it cool to flaunt one’s body in public and, by doing so, simply add to the pressure these young women face.

Grown Men: Believe it or not, many men, especially religious men, would rather not be tempted to lust after women they can’t have. They would prefer to limit their sexual focus to their wives. One might say to them, “If you don’t like it, then don’t look at it.” And that approach would work if visual sexual temptation were limited to strip clubs, magazines wrapped in plastic, and adult videos hidden in a store’s back room. But when the sexuality is inserted into non-sexual places, like a family TV show or a grocery store magazine rack, its lure is unavoidable, and the men are then forced through a form of mental torment that’s too strong for most women to understand, since their sexuality is not constructed the same way.

I’ve encountered numerous feminists online who say that women in the public eye have every right to flaunt their feminine parts to make themselves “feel beautiful” (as if you can’t feel beautiful without flaunting them), and if the men get turned on by it, it’s the men’s fault; the man must control his thinking. The truth is that while the man has some responsibility to control his thinking and behavior, it is never right to try to tempt somebody to think what they shouldn’t. No one would say it’s right to hold a biscuit in front of a dog, whose body has a physical drive for hunger, and then refuse to give the biscuit to the dog, and instead, beat him for looking at it. That would be sheer cruelty. Likewise, it’s equally wrong for a woman to present her body in a sexually-enticing manner to a man, when a man has a physical drive for sex, and then deny the man and blame him for his desires. To paraphrase what Jesus said, “Sin is going to happen. But woe to the person who causes others to sin. It would be better for that person to have a millstone hung around their neck and be drowned in the depths of the sea than what is going to happen to them on judgment day.”

Now I know feminists who read this will accuse me of saying that men have the right to rape women who flaunt their bodies. In no way have I or the Bible ever said this. We live in a civilization where, if somebody does something wrong, it’s OK to tell them that it’s wrong, and it’s OK to have laws in which our legal system punishes them for their wrongs. But it’s never OK for us to take the law into our own hands and punish people, ourselves. And it’s obviously not OK in the Bible to have sex with anyone other than your spouse. Thus, we Christians do not promote what feminists call rape culture. We simply are willing to call out the sins of both sexes equally, rather than pretend that only men can sin sexually. The truth is that both sexes sin equally, even though the sins may manifest themselves in different ways for a woman than they do a man.

Upon being made aware of the millions of people who are hurt emotionally by women who publicly flaunt their bodies, many feminists still act as though they are somehow the victims when others discourage them from doing it. They seem to think that their rights are being suppressed while everyone else’s are being recognized. They’re failing to recognize two things:

First, they are flaunting their bodies without “consent” – the focal word of the #MeToo movement. If a man exposes his man-parts to those who have not consented to see them, he is labeled a pervert. If a woman does it, especially through mass media, she’s a star who no one is permitted to criticize without receiving the wrath of today’s feminists. That’s a double standard, and double standards are always evil. Feminists might argue that its different for the woman, because the man has evil motives when he does it. Indeed, his motives are most likely that he thinks he will turn the woman on sexually, or that he will make the woman feel uncomfortable. Whereas, when a woman does it, her motives are most likely that she will turn men on sexually, that her exposure will make others uncomfortable/offended, that she will show she is more beautiful than other women (“who’s the fairest of them all”), that she will show society that no one can tell her what to do (rebelliousness), or that she will receive lots of money and celebrity worship for her behavior. In either case, none of the motives are righteous.

Second, dressing appropriately requires virtually no sacrifice whatsoever on their part. It’s not as if they are in any kind of pain, are forced to make a strenuous effort, or are forced to shell out extra money for the sake of others’ emotional well-being. All they have to do is cover their boobs and butts, just like 99% percent of the women most of us see on a daily basis. When it comes to loving your neighbor as yourself and putting others’ interests on the same level as your own, it doesn’t get any easier than that.