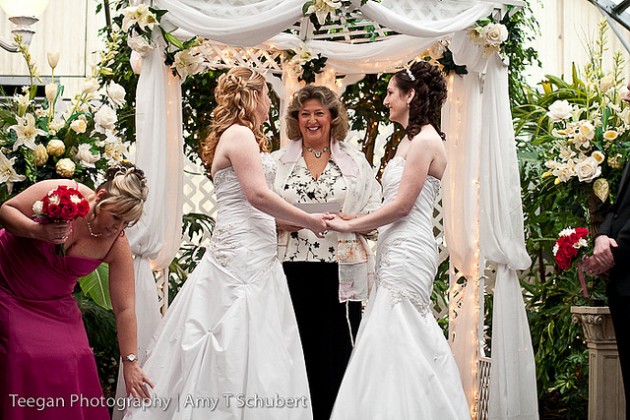 Even though gay marriage is legal in all 50 states, its opponents, most recently Ted Cruz’s father, insist that it will lead to the legalization of child molestation and polygamy. There’s one major reason that they are wrong. It’s real simple. Are you ready? Here it is:

Gay marriages are between two consenting adults. While that might not fit everyone’s religious view of right and wrong, it is a sexual situation that has no victims. Some Christians might argue that society is somehow the victim, but the reality is that if two gay people choose to do their gay thing together, no one is calling the cops.

And that’s the difference between a civil law and a religious law. Religious laws may prohibit something that has no earthly victims, because it is morally wrong according to the religion. Civil laws, on the other hand, are victim-driven. If most people don’t like getting punched in the face, they’ll make face-punching illegal. Most people will choose to give up their right to punch others in the face in order to not be punched in the face by others. That’s where the laws of nearly all civilizations come from – people creating laws to keep unpleasant things from happening to them and their families. It’s a very simple concept, yet millions of Republicanized Christians don’t get it.

Child molestation has victims. It is something children dislike, to put it mildly. Even though children have no say in making laws, most of us, having once been children ourselves, can imagine how horrible it would have been for us to have been sexually-abused as children, and some adults don’t even have to imagine, because they were abused, themselves. So we will continue to keep childhood sexual abuse illegal, because we value the child’s rights to not be molested far more than we value the sexual predator’s right to gratify his urges.

As for polygamy, that’s a little different. One might argue that women might choose to share a man. We saw this in the TV show, “The Girls Next Door,” in which Hugh Hefner had three girlfriends who lived with him at the same time. Of course, they didn’t go through the technicality of getting married, but what difference does that really make? Conservative Christians get too hung up on the technicalities of the paperwork and tend to overlook that fact that people are already free to live as they please, and that denying them access to the paperwork to make it “official” doesn’t change that.

So will we become a predominantly polygamous nation?

The reason, again, is simple: Most women do not want to share their man. And even if women did flock to the Donald Trumps of the world (if polygamy were legal, I can’t help but think that Trump would try to acquire 1001 wives, so he could be greater than Solomon…I think he has already acquired more gold than Solomon), men would complain that the rich guys were hoarding all of the women, leaving millions of men mate-less. And then the women would get mad when their rich husband’s added more wives. It would be a disaster, and that’s why in the modern world, widespread polygamy simply isn’t going to happen.

In Old Testament times, men possessed the land, so women were reliant on them for support. If men died in battle (which was common), so that there were far fewer men than women, then men had to take on multiple wives, so that all women had a means of survival. There’s a sense in which you could say that women in ancient harems were the welfare moms of their day. But today, we have federal assistance programs that help women and their children survive, and we don’t lose large portions of our male population in battle. Of course, if we keep voting for Republicans who love to feed tax dollars to the war machine, we might lose much of our male population in battle. And since those Republicans are often the same ones who despise welfare, they might take that away, too. Then women will have no hope but to join harems for the sake of their survival. So if you’re really afraid of America becoming a polygamous nation, don’t vote Republican!