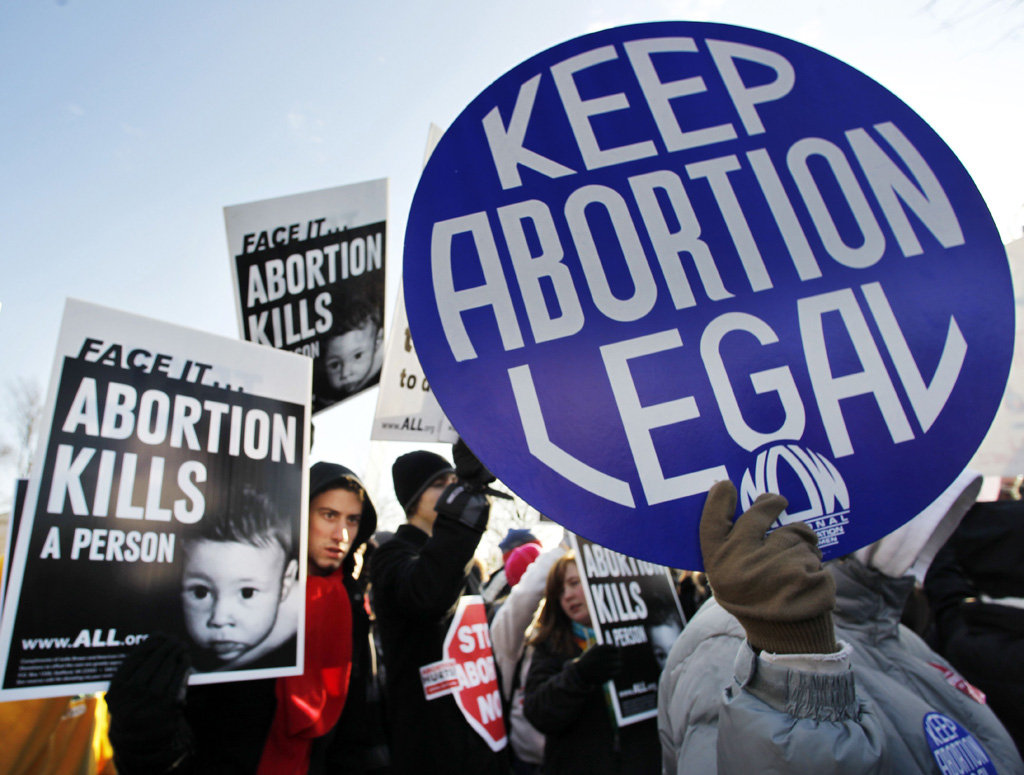 As a teenager in the late 1980s, I was staunchly pro-life. It was a simple concept, really. What could be worse than killing babies? Some argued that it wasn’t really a baby, because it was still inside the womb, in which case it is called a fetus, but that just seemed like a technicality to me. I didn’t see why the location of the child, in or out of the womb, made any difference. So I believed that life started at conception, not at birth. In 1992, despite knowing that Republicans had been exploiting America for the sake of the wealthy, I voted for Republican George H.W. Bush anyway, solely because I believed that voting for pro-choice candidate Bill Clinton was the equivalent of killing babies with my own hands. Even when I started to lean Democrat in 2006 and registered Democrat in 2012, I was still a pro-life Democrat, just like Senator Bob Casey Jr. of Pennsylvania.

But then in 2014, I started following the feed of “The Christian Left” on Facebook. As time passed, they posted an article about how the Bible is pro-choice – an argument I had never heard, despite my many years in Bible-focused churches. The article pointed out how Chapter 5 of Numbers prescribed what was effectively a supernatural abortion for women who had committed adultery, and how Exodus 21:22 prescribed nothing more than a fine for causing a woman to lose the fetus in her womb, while requiring the more severe eye-for-an-eye penalty for any “further injury” to the mother. But I still wasn’t convinced that abortion was okay with God, since neither of these passages addressed abortion as a form of birth control. The article also said that the Bible never mentions abortion as a sin, but I thought, “Of course, it doesn’t. Abortion didn’t exist until the mid-1900s. How ignorant does the author of the article think I am?”

Well, it turned out that I was indeed ignorant about the history of abortion. Abortion did exist in ancient times! The Ebers Papyrus prescribed an Egyptian abortion procedure a century or so before Moses led the Israelites out of Egypt and wrote the Mosaic Law. The Code of Assura regulated abortion in neighboring Assyria at the time of the Prophets. And the Jewish Mishna and Talmud, written shortly after Christ, addressed abortion as well, such as in cases where it’s needed to save the life of the mother.

So if abortion was this prevalent in the biblical world, what should we make of the fact that the Bible never condemns it?

My conclusion: Even if abortion as a means of birth control is wrong, it’s not a biblical priority in comparison to the issues the Bible actually does address, such as the 100+ passages condemning greed and oppression of the poor – the most frequently addressed societal issue in the Bible. So how is it right for us politically-active Christians to shun the Bible’s numerous greed and oppression passages in favor of something the Bible never addressed?

The Bible’s exclusion of anti-abortion scriptures then made me wonder, “Could it be that life doesn’t begin at conception in God’s eyes, but that it begins at consciousness, since it’s consciousness that connects us with God?”

So I did a bit of research to see when a fetus develops consciousness.

What I found is that the part of the brain that controls consciousness and connects the experiential part of the mind with the body and its senses, the thalamus, doesn’t begin to develop until after the 24th week of pregnancy. Prior to the 24th week, consciousness is impossible. Thus the 1st and 2nd trimester fetus experiences as much pain during an abortion as your grass does when you cut it – which is no pain at all. This fact obliterated my traditional imaginary vision of an abortion, in which I imagined a little baby suffering excruciating pain and unable to understand what’s happening to it.

But despite all of this, I still struggled to embrace the pro-choice stance. So I did something I had never done in all of my pro-life years – I prayed to God for Him to show me the right view. I had always assumed that my anti-abortion views were correct, thus I never sought God’s revelation with an open mind. In doing so, I remembered how the book of 2 Esdras, from the Apocrypha (which consists of Scriptures written between the Old and New Testaments and is only included in Roman Catholic Bibles), had mentioned a storehouse of souls. So I turned to it to see if it gave me any clues regarding the ensoulment of the fetus. I prayed for revelation of the truth again as I began to read Ezra’s first vision, and I was immediately struck by the following words: “…at your command the dust brought forth Adam. His body was lifeless; yours were the hands that molded it, and you breathed the breath of life into it and he became a living person [2 Esdras 3:4-5].” So when did Adam become a “living” being? Not when his body was fully formed, but only once he breathed. Even if the Apocryphal books are not the authoritative word of God, they still reveal what Jews thought constituted life. Plus, for me, this scripture was an immediate answer to prayer.

Then I received even more divine guidance. I wrote the paragraphs you just read Sept 14th-16th, 2015. Last night, the 16th, as I proceeded through my bi-annual reading of the Bible from beginning to end, I just happened to be at the point in which I read one of the passages most commonly quoted by pro-life Christians. That passage is Psalm 139:13, which says, “For you created my inmost being; you knit me together in my mother’s womb.” They argue this proves that God Himself forms fetuses in the womb. But then, just a few verses later, I encountered a follow up verse that I had never heard a pro-life Christian quote. It (verse 15) said, “I was woven together in the depths of the earth.”

What in the world does that mean?

Are fetuses formed in the earth’s molten core?

Of course, not. Clearly, this psalm is symbolic poetry, as is the case with most Psalms. It is not a literal description of how things work.

Again, the timing of this, just as I’m writing this article that I never in my whole life imagined I would write, is a bit on the miraculous side. It may not prove anything, but it gives me a sense of assurance that God is guiding me through his difficult political-theological transition. And it is indeed difficult. I realize that one’s abortion stance is the political sniff test for conservative Christians. If you are pro-choice, they damn you in their hearts as an evil person from whom no good or righteousness can come, and then they refuse to listen to anything you say. So my change in stance will make it harder for me to reach them. But I cannot misrepresent what I believe has been revealed to me. Perhaps God has a different audience for my ministry.

So will I now appear at a pro-choice rally proclaiming a woman’s right to choose?

I still feel uneasy about abortion and consider that maybe Roman Catholics are correct in the idea that all forms of birth control create a sex-without-consequences world which promotes sexual irresponsibility and makes it more difficult for a family with many kids to survive in a world where most families have only two. Also, I’m grateful that my mother, who was 14 years old at the time of my conception, “did the right thing” and chose to keep me rather than abort me (of course, I’m also glad that she “did the wrong thing” by fooling around at the age of 14 – otherwise, I wouldn’t be here). Yes, we lived in a trailer and Spam was on the menu, but our relationship was far more valuable than any prestigious career she might have had or any extra money she might have earned had I been aborted. So I encourage all Christian women to follow the noble path of bearing their children rather than aborting them.

But when I weigh that uneasiness about abortion with that fact that, according to the World Health Organization, “47,000 women die [worldwide] from complications of unsafe abortion each year,” I can’t vote to increase that number by denying women safe abortions in the U.S. I believe it is far more tragic, disruptive, and heartbreaking to lose a sister, daughter, or granddaughter, because she made a desperate, risky decision to have an illegal abortion, than it is to lose a non-conscious organism whom no one has ever met. And I think Exodus 21:22 backs me up on that belief by demonstrating that a life-in-progress is worth more than a life-not-yet-begun.

And perhaps the most important point of all when it comes to the legalization of abortion is that, regardless of what my religious scripture says, we live in a multi-religion nation that has, since its inception, guaranteed its people freedom from being forced to follow the religious rules of others. If our reason for banning abortion is purely a religious one, the Constitution disallows it. And if we Christians rebel against this constitutional right, Americans won’t join Christianity; they’ll despise it.

Update – As of 2019, I am changing my stance to moderately pro-life. My change in stance does not invalidate the rest of what I have stated in the article. My points still stand. I still believe that conscious people matter more.

The reason for the change is two-fold:

1) Further research showed me that only 200 women in the U.S. died per year from having illegal and unsafe abortions in the years leading up to Roe v.Wade. That number should be wiped out, should abortion become illegal, by educating women about the prevalence of financial assistance for pregnant women and their children through WIC and other programs. That’s assistance we didn’t offer in the 50s and 60s.

2) I’ve come to realize that a fetus’s suffering during an abortion is not the most important factor, because all of us will suffer from death, and most of us will suffer more in life than we would had we been terminated in the womb. The avoidance of death and pain is not what life is about. Rather, life is about living. God put us on this earth to live. The reason murder is such a terrible crime is because the murderer takes away someone’s life without the authority to do so, not because the murderer causes someone to suffer what they were going to suffer anyway. Therefore, since abortion takes away life, I must declare abortion to be wrong, and I must support the idea of it being illegal.

However, due to the minimal amount of the fetuses’ suffering, and the fact that Numbers 5 promotes what is effectively a supernatural apportion for women who have committed adultery, I fully support legal exceptions for abortions due to rape, incest, and the mother’s life being in danger. If the Bible can make an exception for adultery, we can make exceptions for these. But when it comes to abortion as a means of birth control, I have to speak out against it, and speak out against the false accusations that those who believe in rescuing fetuses from abortions hate women, when it is far more likely that they care about babies, half of whom are female.