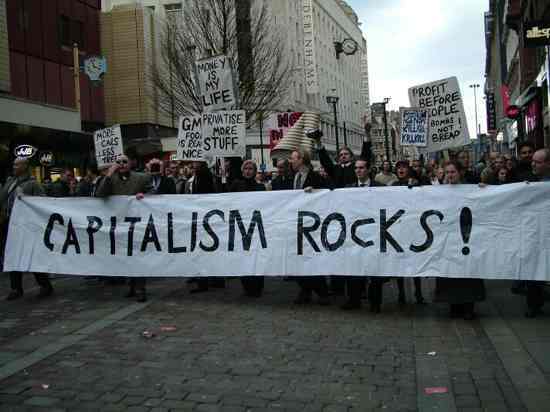 [The following article is an excerpt from my book, “Rescuing Religion from Republican Reason.”]

Imagine you’re the inventor and manufacturer of the first bicycle. The bike is fast with a smooth ride. People love it. As soon as you make one, someone buys it. But there’s one flaw: Cyclists return to you, complaining of the injuries they’ve suffered trying to stop the bicycle, because the only way they can is by putting their feet down, falling over, or crashing into something. So you modify the bicycle by adding brakes. You make it better!

Are you now a bicycle hater, because you altered the bicycle from its original “pure” form by adding a modifier to keep it from getting out of control and hurting people?

Of course not! This argument is absurd! Yet, Republican politicians and pundits make similar accusations against anyone who would modify pure corporate capitalism, calling them socialists. They effectively tell us that if a something has benefits, it’s wrong to improve it by fixing its flaws.

Now, imagine trying to design from scratch the best economic system possible for society. You establish liability protection to create big companies so that efficiencies in production may result. But then, after decades of the system in operation, you realize it has one major flaw – disparity of wealth – too many oppressed poor people. So why not make the system better by modifying it to fix this problem?

Ultimately, the question you need to ask yourself is, “What is my goal in creating the system?”

If the answer is “to make life better for as many people as possible,” then it’s your duty to modify the system to achieve this goal. On the other hand, if your goal is, “I want to enrich myself and my privileged friends while keeping everybody else down, so I can exert my power over others,” then you leave corporate capitalism unmodified, as Republican politicians and pundits want.

Modifications of capitalism do not have to be in the form of handouts that might take away motivation to work. They can be in the form of enacting a minimum wage, limiting the length of the work week, enabling workers to collectively bargain with their employers, providing things to society that everyone can use (such as schools and roads), and paying for the needs of those who can no longer work, such as seniors and the disabled. Some of these modifications require sharing the wealth of the wealthy with society through taxation, and conservatives say that’s unfair. But let’s not forget that the wealthy wouldn’t have all of those riches if it weren’t for corporate liability protection from the government. Since the rich couldn’t raise capital for big businesses without this protection, they owe their wealth to this system, not just to their own efforts. If, through bankruptcy, society is forced to share in the losses of the wealthy, then it’s only right that the wealthy be forced to share their gains with society.

Republicans have argued that since the poor can purchase the cheaper products pure capitalism produces, that the poor benefit, too, so the rich sharing with the poor need not be mandated. However, it’s not as if the poor benefit from cheap products and the rich don’t. The poor have a very limited choice of products, because they have limited wealth (our history shows that they could afford nothing more than a life of squalor under pure capitalism), while the rich can afford an abundance of products due to their great wealth. So the rich have the advantage here, too. Also, to argue, as Republicans do, that stealing from society (through liability protection) to enrich the wealthy is okay, because it’s better for the common good, is to say that the well-being of the common good is more important than right and wrong. In other words, “what works” trumps “what’s right,” which is what I’ve been saying all along.

Furthermore, modifications that minimize disparity of wealth establish a balance between investment money and consumer spending money that enables the investments to pay off. When such a balance exists, both the rich and the working class prosper in a flourishing economy. But without the buying power of working class customers, investments go bust, and the economy stagnates. Business owners simply won’t invest in creating jobs that create goods and services no one will buy, because that would result in a total loss of investment money. This was known as “the surplus” problem in the 1890s depression, when manufacturers had efficiently created lots of products, but were running short on customers to buy them. Today, thanks to the resurgence of conservative economics since 1980, “the surplus” problem has undermined our economy again. Investment money abounds, but customers are in short supply; so the wealthy invest in gold, derivatives, real estate, short-selling, and commodities, but not in job creation.

One of the first things I learned in Economics 101 at Penn State was that no system or economic approach solved all of the problems of unemployment, inflation, deflation, high interest rates, trade deficit, and budget deficit simultaneously. Even capitalist-oriented approaches, such as Keynesian, Supply-Side, and Austrian economics each solve one or two of the problems by making at least one other problem worse. For example, the Supply-Side solution of cutting taxes increases spending and investing in the economy, which creates more jobs, but then the budget deficit grows from the decreased tax revenue, which will ultimately drives up interest rates and, in extreme cases, leads to hyper-inflation if the government has to print money to pay its debt. To me, each economic approach is like rowing a boat straight ahead with one oar. If you continue to paddle on the same side, the boat will veer farther and farther off course. If you then switch the oar to the opposite side, the boat will, at first, get closer to being on course, but then will cross over and go farther and farther off course in the opposite direction. Likewise, if we continue to apply a singular economic approach, the economy will veer farther and farther off course as the years pass.

Since no system solves all economic problems, how then can we give any of them sacred status?

Like all things man-made, whether wooden statues or philosophies, they fall way short of the perfection of God. None of them are righteousness. None of them are to be held sacred. As Paul said in Romans, “You’re the servant of the one you choose to obey…” We Christians can serve God and commit ourselves to the purpose of His Law (the well-being of others), or we can serve the man-made system of laissez-faire corporate capitalism. If we serve the latter, can we truly call ourselves Christians?