The following is an EXCERPT from my book, Rescuing Religion from Republican Reason
(pictured at right). 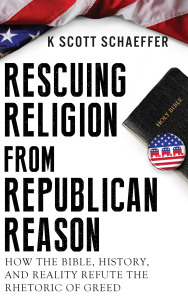 If you ask Republican Christians why they wage a political battle against gay marriage, many of them will respond by saying, “Because the Bible says it’s wrong.” This assertion isn’t entirely true. The Bible never says gay marriage is wrong. It does, however, say re-marriage is wrong. The Gospels contain 4 quotes of Jesus equating it with adultery, one of the Bible’s top ten sins. Some will argue that homosexuality gets the death penalty in the Bible and re-marriage doesn’t. However, the sin of adultery, which Jesus equates with re-marriage, gets the death penalty, and so does the profaning of the Sabbath.

Where, then, is the Christian legislative movement to outlaw adultery, re-marriage, and the breaking of the Sabbath?

The answer is, “Nowhere!”

Quite simply, Christians break these laws all of the time. According to a 2008 Barna Research Group study, 26% of all Evangelical Christians have been divorced. It’s harder to find statistics on adultery, but a significant percentage of Christians commit that sin, too. And just about all Christians break the Sabbath. Even Christians like me, who try hard to avoid doing any work on the Sabbath, are glad that others are willing to work at restaurants and play professional sports on Sundays, because that makes our Sabbath days more enjoyable. We Christians benefit from the leniency of our nation’s laws regarding some of the Bible’s greatest sins. We choose not to launch a legislative campaign against these sins, because we either commit them or know we are capable of giving into the temptation to commit them.

Homosexuality, on the other hand, is something nearly all Christians know will never tempt them. That’s why they choose to outlaw it rather than outlaw the sins of adultery, divorce, re-marriage, and breaking the Sabbath. Apparently, from a legislative perspective, Republican Christians only say “the Bible says so” when it “says so” about someone else. This, of course, is hypocrisy and a violation of one of Jesus’ most famous quotes (from Matthew 7:4): “Or how can you say to your brother, ‘Let me take the speck out of your eye,’ and behold, the log is in your own eye?”

Before gay marriage was ever an issue, there wasn’t much that Christians could do politically to oppose homosexuality. In the past, some states made laws that prohibited homosexual sex. These laws, however, couldn’t be consistently enforced, because nobody will call the police when two homosexuals consent to having sex in private. So these laws had little impact and were hardly worth passing. Meanwhile, homosexuality remained a fringe lifestyle that even most non-Christians disrespected. All of that changed, however, when gay marriage became a high-priority political issue. This gave Christians the opportunity to attack homosexuality in the political arena. Since homosexuals pursued the legalization of gay marriage for their own sake and not for the sake of controlling the behavior of others, most of America saw them as martyrs—people minding their own business while being persecuted by an outside group—that group, of course, being Christians.

Many Christians are unaware that martyrdom has played a significant role in growing Christianity into the world’s largest religion. For example, in Africa, early missionaries took coffins with them to their new land, because they knew that were likely to be killed by natives. Their expectations became reality, and, sure enough, many Africans came to accept Christ as a result of Christian martyrdom. Likewise, Christianity spread throughout the Roman Empire as a result of Romans having compassion for, and being inspired by, persecuted Christians. Granted, these Christian martyrs actually died; whereas, gay marriage martyrs live on. Nonetheless, America has compassion for gay marriage martyrs, because Americans see them as being persecuted by an outside group for seeking a legal right that appears to hurt no one else.

Not only does America feel compassion for homosexuals, but many Americans feel contempt for Christians, thanks to the gay marriage debate. I’m not talking about homosexuals here; I’m talking about bystanders. America has, since its inception, always been a multi-religion nation. The Constitution’s First Amendment effectively guarantees that one religion cannot rule over another. When a religious group tries to legislatively impose one of its religious beliefs on the rest of nation in the name of “God says so,” the First Amendment nullifies their efforts. This is not to say that the U.S. Constitution out-ranks the Bible. But this is the reality of the nation in which we live. Because of this, when Americans see one religion trying to force its religious beliefs on non-believers, they despise that religion, because it’s attempting to destroy one of America’s most basic freedoms.

(Some might argue that gay marriage prohibition is civil law and not religious law. But as I stated in the No Taxes chapter, every nation has business, property, and injury laws which constitute what we might call civil laws. Without civil laws, they would not be civilizations. Not all nations, however, have laws that regulate worship practices, appearance, diet, and sexuality, because these are religious laws. While most marriage laws are of a civil nature in terms of addressing such things as property rights, sexuality laws are moral laws; and the “gay” part of gay marriage is sexual, not civil.)

Many Christians will dispute this by saying that God calls us to establish righteousness in the world; we must abolish evil, even that which is committed by members of other religions. If they are right, gay marriage is the wrong place to start. The place to start is the Constitution. Freedom of religion would have to be stricken from the Constitution and Christianity made the national religion for all biblical sins to be outlawed. If we were to become a Southern Baptist nation, for example, we could abolish gay marriage, homosexuality, adultery, divorce, remarriage, breaking the Sabbath, worshipping other gods, alcohol consumption, secular music, and dancing. Then we will have ridded America of all evil (supposedly). We will also have given non-Christians (and even Christians who are not Southern Baptists) every reason to hate Christianity. Their chances of loving God will be about the same as us loving Allah if we were all forced to wear burkes and obey Islamic law.

If we force Christian religious laws upon non-Christians, we will destroy Christianity in America. People will hate us, because we are the persecutors. As more and more Americans avoid Christianity, Christianity will cease to be the majority religion. Once that happens, those who resent the faith just might persecute it. And then a day may come when Christians are forced to obey the laws of some other religion. Or perhaps they will be banished to the shadows. My point is what goes around comes around. So we need to have some empathy for others, because we may someday find ourselves in a position similar to the one we have them in now.