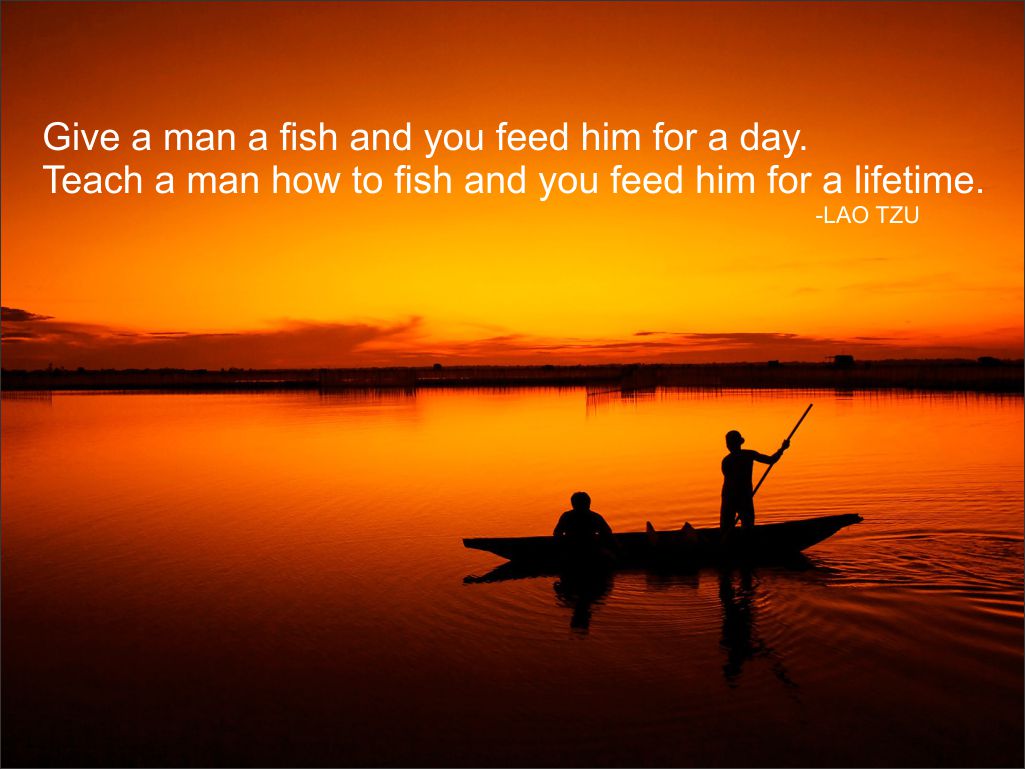 If the man asks to use one of your many fishing rods so he can fish and feed his family,
Tell him that he first needs a fishing degree from your fishing college,
And the cost for him to get that degree is $100,000.
When the poor man says, “I can’t afford $100,000. I don’t even have $100,”
Tell him that you will loan him the money,
And that he can pay it back with interest and be indebted to you for life.

Once he gets the fishing degree and asks you for a fishing rod,
Say to him, “You may use my fishing rod,
But you must give all of the fish you catch to me, because I own the rod and the lake,
And then I will give you your share for the work you’ve done.”
Once the poor man fishes many hours in the heat of the sun and the cold of the night,
Enduring sunburn, blisters, sore legs, and an aching back,
And then brings you the 100 fish he worked so hard to catch,
Keep 99 of the fish for yourself and give him one fish as compensation.
When he complains that the compensation is unfair,
And that his family cannot survive on one fish,
Accuse him of Class Warfare!
And remind him that you are the hero who educated him, loaned him money, and created his job.

When he and his family become sick from malnutrition and the toxins you dumped in the lake,
And he asks you for healthcare since he cannot afford it,
Tell him that if he were a righteous and hardworking person, he would be able to afford healthcare,
And that he is a moocher for asking someone richer than him to pay for it.

When he and his family die from their poverty, convince yourself that you are not responsible.
And when you die and reach the afterlife,
You will find that you no longer share a lake with the poor man.
He and his family will reside at Paradise Lake,
Where there is a fishing rod for everyone, and everyone gets to keep their fish,
While greedy fishing rod hoarders like you are never permitted there,
Because they couldn’t call it paradise if you were,
Since your greed would ruin it for everyone.

You will reside at a different lake.
It is called the Lake of Fire.
And the swimming there is unlimited.