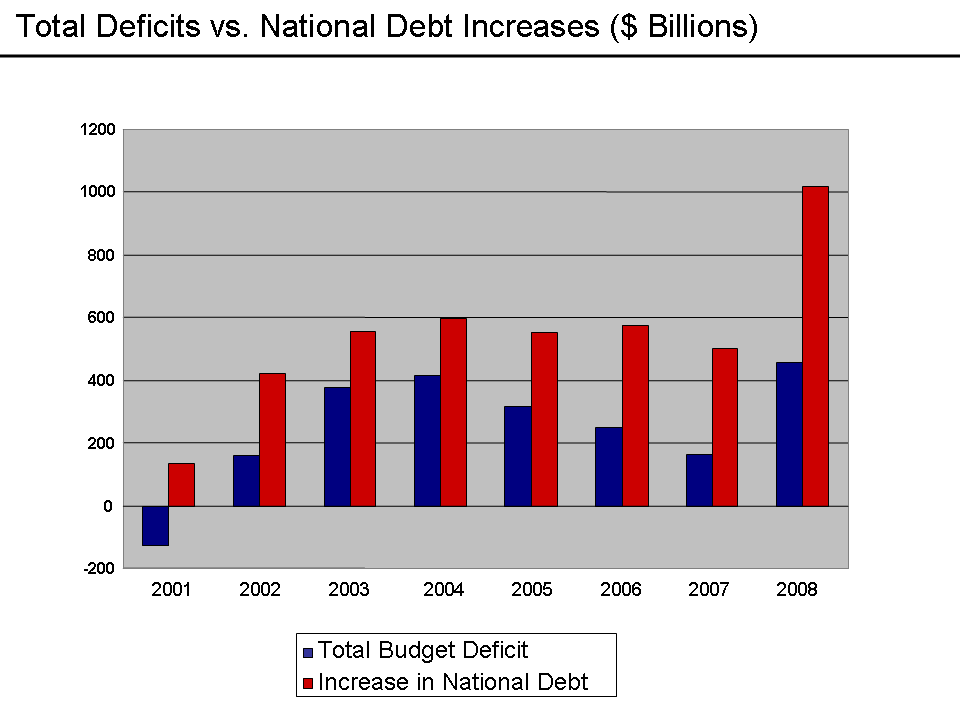 [The following excerpt is from my book, “Rescuing Religion from Republican Reason.”]

Do Tax Cuts Always Pay for Themselves?
One of the great deceptions promoted by Republican Christians is that tax cuts always pay for themselves. So anytime Republicans propose a tax cut (which is all of the time, regardless of whether we have a good or bad economy, a budget deficit or surplus), they insist it will help the economy without adding to the nation’s debt. They tell us the economic growth from the tax cuts will be so great that it will more than compensate for the decrease in the percentage of incomes taxed. And the way Republicans do this is by cherry-picking the numbers and quoting numbers without making proper comparisons. To give you an example of the latter, a popular internet meme has been that Reagan cut taxes from a top rate of 70% to 28% (although they fail to mention that he increased the capital gains tax rate to 28%, compared to the 20% rate we have now, and he increased rates for lower income workers) and, as a result of that cut, total income tax revenues increased from $360 billion in 1980 to 660 billion in 1990, so this proves that taxes actually increased after the Reagan tax cut. This is true, as you can see from the following print screen from Table 6 of the IRS Data Book, which you can find at www.irs.gov (The first screen shot is of the header, so you can see how the columns are labeled): 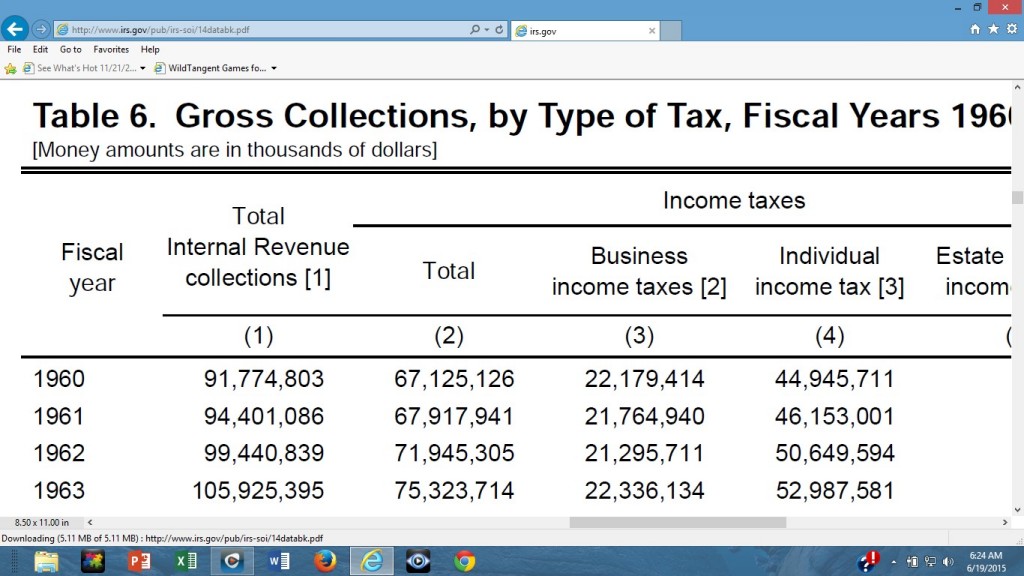 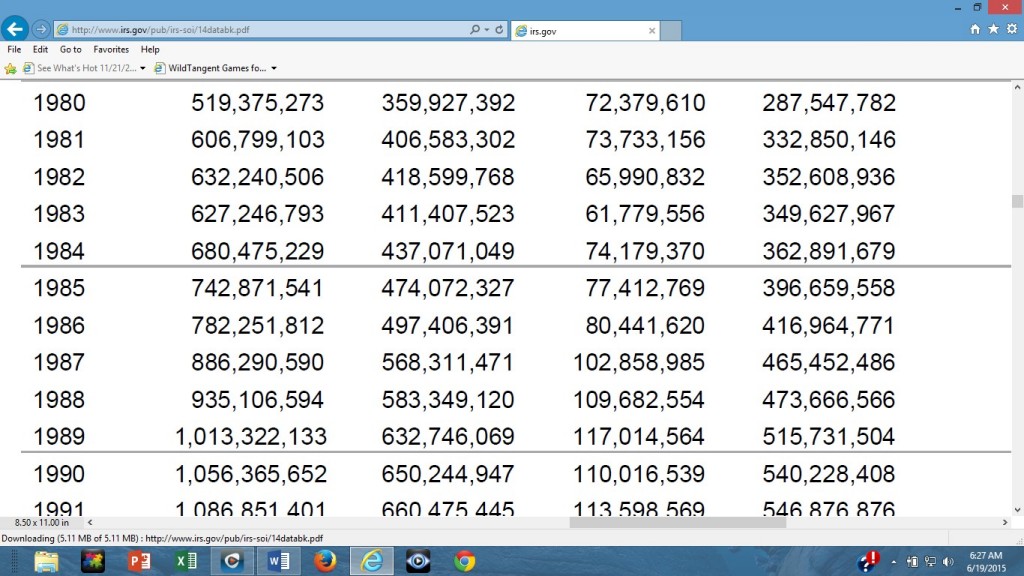 However, if we look at the years following the Reagan 1981 tax cut, you’ll see that total income tax (column 2) went from 406 billion in 1981, to 418 billion in 1982, to 411 billion in 1983, so if you adjust for inflation, which was around 5% at the time, it was actually a slight loss for a few years. Only if you look at the whole decade can you say that the tax revenues really went up. But the fact is that the normal rate of annual tax revenue growth that always comes from annual inflation growth, population growth, and production growth was halted for a few years by the Reagan tax cuts, which put us behind the 8-ball and contributed greatly to the 189% increase in the national debt (the worst of any president in history) that Reagan oversaw during his 8 budget years. 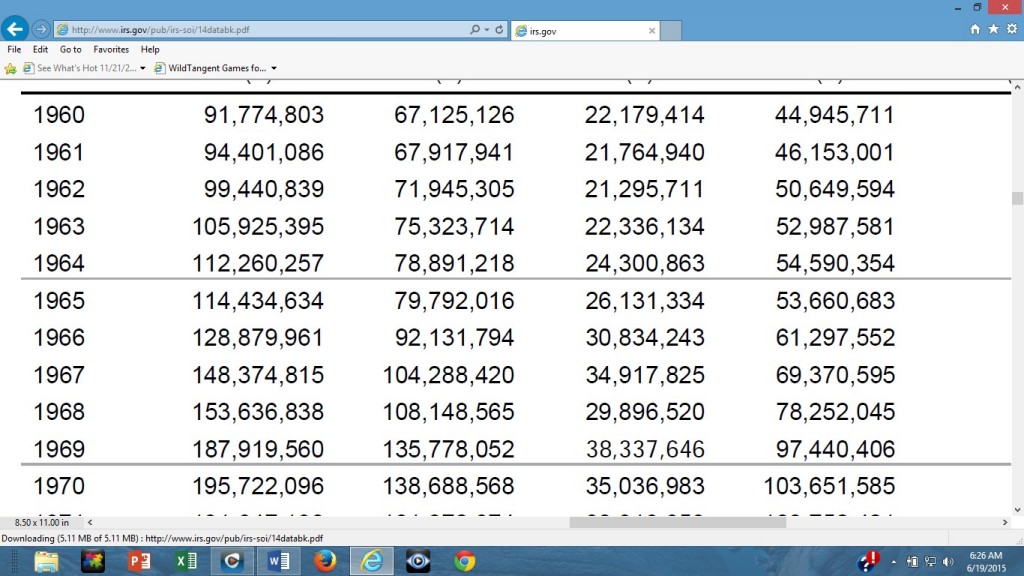 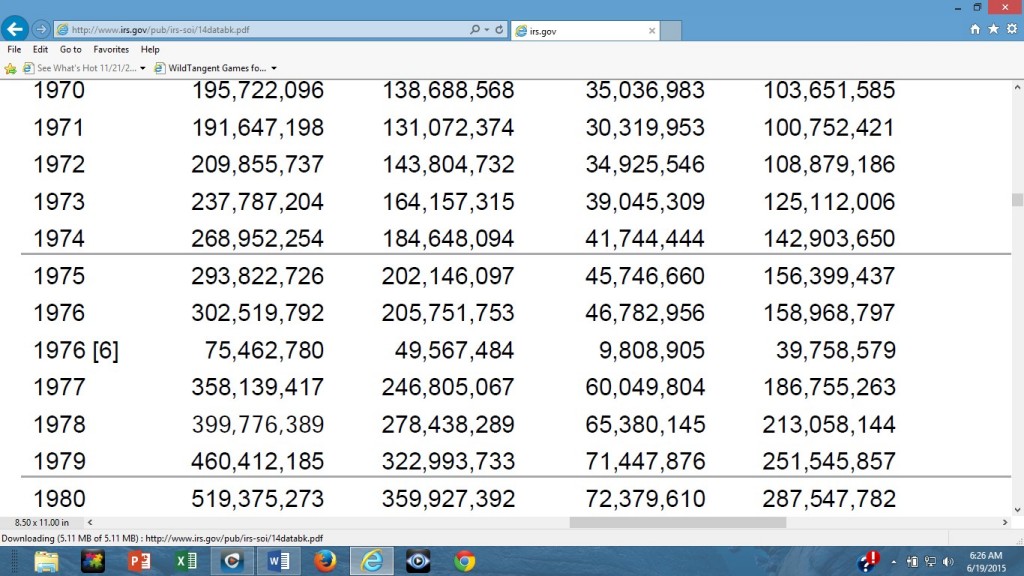 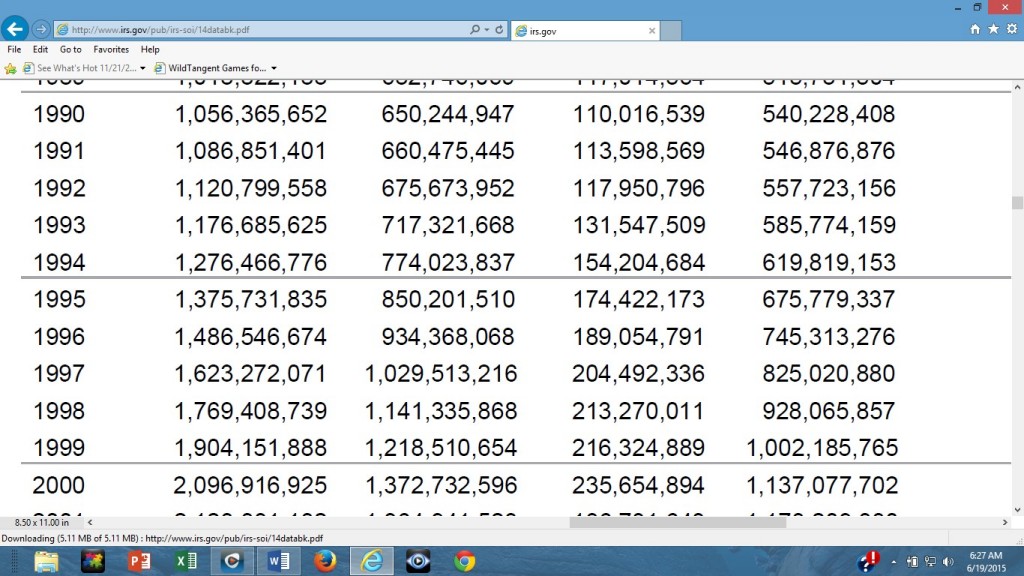 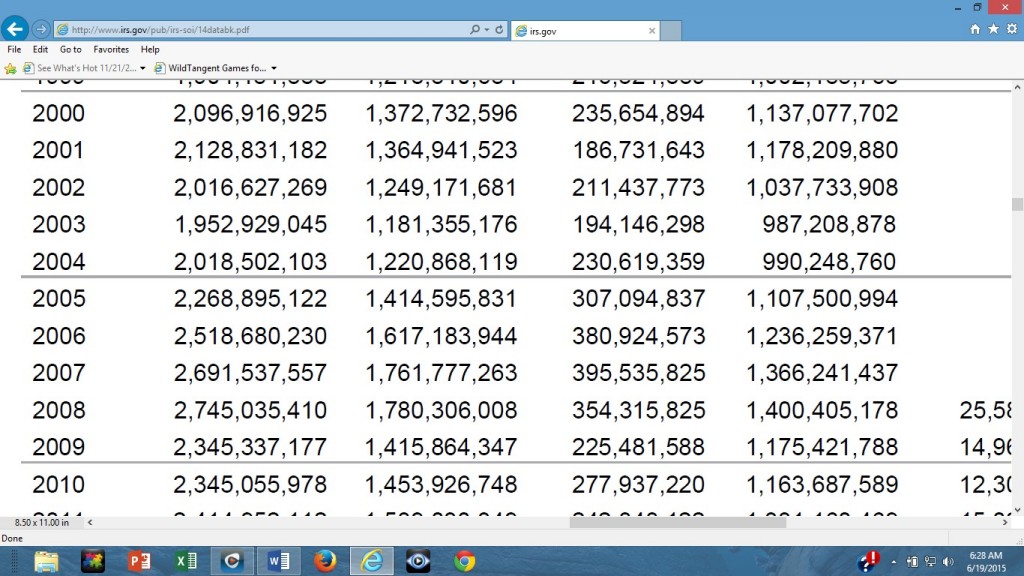 In the 2000s, income tax revenues increased from 1372 billion to 1453 billion (a 6% increase). If you factor out inflation and population growth, the tax cuts resulted in a massive loss in annual revenues by the end of the decade.

The right-wing Christian book, “Politics According to the Bible”, by Wayne Grudem, dares to use the Bush tax cuts to make the same claim that tax revenues always increase after a tax cut. What he does is cherry-pick the year 2005, the first year tax revenues returned to a point above where they were before the tax cuts were enacted in 2001, and only cites the 16% revenue growth rate from that year as proof the tax cuts increase revenue. He hides from his readers the fact that total income tax revenues fell from 1.365 trillion in 2001 to 1.249 trillion in 2002, and fell further to 1.181 trillion in 2003, and then rose back up to 1.221 trillion in 2004, and finally 1.415 trillion in 2005. If you look at the years leading up to the cuts, on the other hand, you’ll see that income tax revenues increased from 717 billion in 1993, the year of the Clinton tax increases, to 1.365 trillion in 2001. That’s revenue growth of 81 billion per year that mostly came from GDP growth (as well as inflation and population growth, as always), all despite the fact the Clinton raised taxes on the rich, which Republicans had predicted would be economic Armageddon. The Bush tax cuts reversed this growth and undermined our nation’s ability to pay its bills. According to an analysis by the Congressional Budget Office, the Bush tax cuts cost the U.S. 2.8 trillion dollars in tax revenue from 2002 to 2011, a loss of 280 billion dollars per year. Yes, conservatives might argue that revenues did increase for a few years before the 2008-2009 recession began, a recession caused by a housing bubble that was largely fueled by the wealthy dumping their Bush tax cut savings into real estate investing (which was attractive at the time due to low interest rates), but then revenues stagnated again. So while the Reagan tax cuts may have resulted in an 80% increase in annual income tax revenues from 1980-1990, the Bush tax cuts only resulted in a 6% increase in annual income tax revenue from 2000 (1372 billion) to 2010 (1454 billion). That might be the worst decade of tax revenue growth of all time.

All of this isn’t to say that tax cuts have never paid for themselves. The Kennedy/Johnson tax cuts of 1964 did increase revenue as a result of improving the economy. But let’s not forget that these cuts lowered the top marginal income tax rate from 91% (Wow!) to 70% (still “Wow!” – by today’s standards) and the corporate tax rate from 55% to 47%. The rates of 70% and 47% still collected such a large percentage of growing incomes that tax revenues increased. But when Reagan lowered the top rate to 50% in 1981 (and to 28% in 1986, while raising capital gains), the results weren’t as good. It was just short of a break-even for the budget. Then the Bush tax cuts lowered the top rate to 35% (and capital gains to 15%), which delivered a serious blow to the budget. And it can get worse going forward. The budget proposed by 2012 vice presidential nominee and Republican Congressional Budget Director Paul Ryan called for a 25% top marginal income tax rate and for 0% capital gains, dividends, interest, and corporate tax rates. Zero times any amount of growth is zero dollars of tax revenue! The Ryan plan would have been the fast track to debt doomsday – a day when no one will lend the government money out of concern over their ability to pay it back. At that point, the government will have to print money to pay its debts, like Mexico did in the 1980s (which resulted in 4 straight years of over 100% inflation per year). We can avoid such a fate by establishing tax rates that pay our bills as we did in the 1990s. Some would say to cut spending instead, but both parties have proven that, given total control, they can’t limit spending enough for our current tax rates to pay for it.

Today’s Republican approach to tax cuts is all out idiocy. The idea that cutting tax rates lower and lower will always increase revenue is a lie. Any sensible person should realize that there is a threshold below which lower tax rates will hurt tax revenues. If you drop the rates too low, the debt grows. Reagan proved that a little. Bush proved it a lot. And judging from the rhetoric of Republican candidates like Ted Cruz, Mike Huckabee, and Rand Paul, the Republicans are prepared to cut rates even lower to a point from which we will never recover in our lifetimes.

Oh, and one more thing…Republicans also like to say that increasing income tax rates will damage the economy so badly that tax revenues will fall. For example, Mike Huckabee said in his book, “A Simple Government,” published in 2011, “‘Arthur Laffer…the father of Supply Side economics…anticipates that the rise in taxes from the expiration of the Bush tax cuts [in 2012]…will cause a “crash in tax receipts,”…causing even higher deficits and unemployment.” Well, Obama went ahead and let the Bush tax cuts for the wealthy expire at the end of 2012. So did tax receipts “crash” in 2013 and 2014? 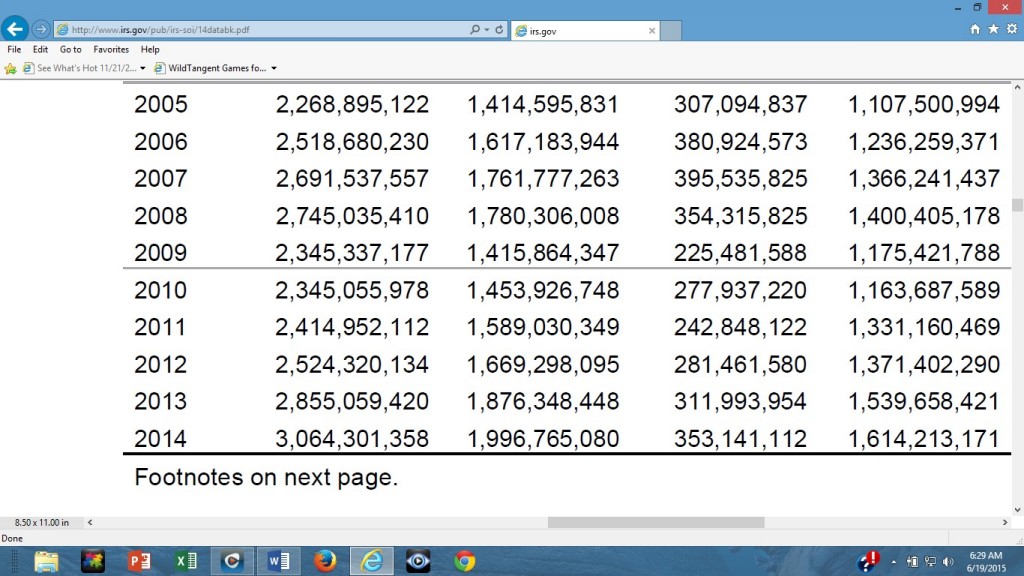 Isn’t comprehensive economic data a bugger if you’re a hardcore Republican?
It’s like kryptonite, isn’t it?