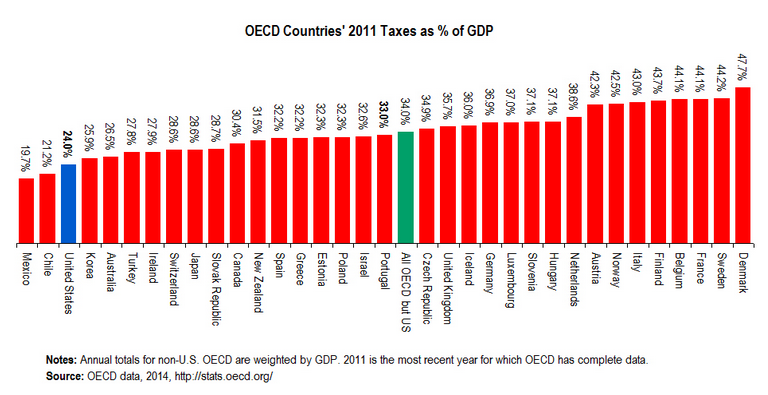 [The following excerpt is from my book, “Rescuing Religion from Republican Reason.”]
Do Taxes Hurt the Economy?

Should you have an opportunity to counter conservative arguments with what I’ve shared thus far, it’s likely that, at some point in the conversation, your opponent will abandon the “what’s right” argument and switch to the “what works” argument. In doing so, they’ll argue that taxes are bad for the economy, and the lower the taxes, the better off we all are.

Before we get into theory about how economics works, let’s look at some international numbers comparing economic growth and tax rates for long-time capitalist countries:

Of the large, well established economies in the world, ten of them have had GDP growth greater than the United States in the years since we embraced the anti-tax ideology of the Reagan Revolution. Of those ten, seven have had higher taxes than us, some of them much higher. Two of the three countries with lower tax rates than the United States have serious debt problems. On the other hand, none of the countries taxing above 30% have serious debt problems, except Belgium. More remarkable is the fact that every country on this list, except Spain, had a lower unemployment rate than the U.S. as of 2011, and all of them have a longer life expectancy for their people. No need to despair, however, the U.S. does lead this group in one category: We have richer rich people than anyone in the world!

Tea Party conservatives love to talk economic theory, but they hate comprehensive international comparisons like this one, because they indicate that other countries are doing better than the U.S., despite not practicing Republican every-man/woman/child-for-itself policy. For 30 years after WWII, America had a huge advantage over European nations that had been reduced to rubble by the war and needed American manufacturing to rebuild. That lack of competition gave us the illusion that our system was the best. Once Europe got back on its feet, however, they proved our way is not the only way.

Why would countries with greater wealth redistribution than the U.S. have greater economic growth?

Imagine an economy in which 80% of households can afford to buy a car. We’ll call this the low-disparity economy. Now imagine a high-disparity economy where only 20% of the households can afford a car, but 1% are extraordinarily wealthy. Will the superrich buy enough cars to make up for the rest of the population? They may buy more than they need, but not enough to make up for everyone who can’t afford a car. Even if they buy extra cars, will they drive them enough to keep as many mechanics busy as the low-disparity economy will? Not even close! The low-disparity economy will employ 4 times as many mechanics as the high-disparity economy will, because, in the low disparity economy, cars will be driven 4 times as much. The same goes for carpet cleaning. Since it only makes sense to clean carpets every so often, the superrich will not spend so much of their wealth on carpet cleaning that they compensate for the 80% of citizens who can’t afford it in a high-disparity economy. As disparity of wealth increases in an economy, fewer customers means fewer jobs needed to serve those customers, which means fewer opportunities for business owners. Without customers, businesses go bust. The healthiest economy is one that strikes a balance between investment money and the consumer spending money that makes those investments to pay off.

One of the most deceptive claims from the Republican gospel is that tax cuts for the wealthy are the best medicine for an economy; if we give the wealthy more money through tax savings, they have no choice but to create jobs with it. This is a lie. The wealthy have plenty of places to invest their money other than in business growth and job creation. When an economy suffers a demand crisis, the wealthy will not invest their money in creating jobs that create goods and service that won’t sell due to a lack of customers. They won’t hire more people to make more cars when they can’t sell the cars sitting on the lot. That would be no better than burning their money. In such times, the wealthy find it more profitable to sock away their tax savings in commodities (gold and oil futures – notice how much they go up in a bad economy), investment gambling (short-selling and derivatives) and high end real estate. These are not investments in business growth that create jobs and help the economy. These are simply exchanges of wealth between the rich as they play a financial game of King of the Hill. They effectively keep their tax savings out of the economy. This is why the Reagan-inspired trickle-down effect fails. Tax cuts for the wealthy are the worst possible economic stimulus in a demand crisis.

To track the effectiveness of various forms of economic stimulus, economists calculate what they call multipliers. A multiplier tells us how much our nation’s GDP grows within twelve months after the stimulus has gone into effect. For example, if the government spends one billion dollars and GDP increases by 1.3 billion over the next year, then the modifier has a value of 1.3. Calculating them is not an exact science, since many factors affect GDP, but they help us compare the effectiveness of various forms of economic stimulus.

Fiscal Stimulus Multipliers (As of the End of 2011)

Notice that spending stimulates the economy more than tax cuts. The reason is simple. People who earn enough to pay their bills save their tax cut money rather than spend it and, thus, keep it out of the economy. When the government spends money, however, it does one of three things: it pays its employees, it buys goods and services from American companies who pay their employees, or it distributes it to low income earners and the unemployed who spend almost all of their income on necessities. Money spent by the government goes back into the economy (with the exception of foreign aid and foreign defense spending). The Tea Party acts as though the government ships our tax money into Pluto’s orbit never to be seen again. Taxation doesn’t remove money from the economy; it simply redistributes it, usually from those who hoard it to those who spend it in the economy. Redistribution of wealth, within reason, is great for the economy.