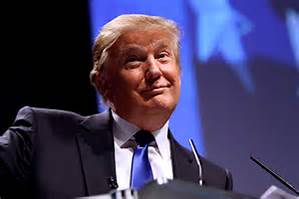 A Trump-supporting relative at a 2015 Christmas gathering asked me, knowing that I am not a Trump supporter, “So what do you think Trump’s motives are for wanting to become president? I think he really wants to make America great again.” At the time, I answered that I can’t read minds, that I suspect it’s all about ego; that Trump is bored with making money, so it’s really about power and fame now. While that answer probably contains some truth, I think it just scratches the surface. As I gave the question more thought later, the answer crystallized. Now if only I could build a time machine, go back to the moment of that question, and lay down the new and improved answer (I have this desire a lot). But instead, I’ll just share it with you.

For several years now, I’ve shared my belief with others that, when you vote Republican, you may as well vote the oil companies, banks, and defense contractors to be our government. You may as well place their executives and major shareholders right in the seats of the Capitol, the White House, and the Supreme Court. From there they will make decisions to cut their own taxes (both business and personal), shovel tax dollars to their companies, and fight against every worker, consumer, and environmental protection, because they despise anything that limits their ability to exploit Americans and the world for the sake of even greater wealth and power. (If you’re a conservative who wants to argue that the Democrats do the same, I say examine the legislation and Supreme Court rulings, such as the 5 Republican-appointed justices voting that money equals speech and that corporations are people who can funnel unlimited millions into political campaigns through SuperPACs, while the 4 Democrat-appointed justices voted against it.)

Donald Trump, of course, represents neither the oil, the banking, nor the weapons industry. Rather, he represents the real estate and construction industries. When Trump speaks about building a wall, he says, “I build things. That’s what I do.”

But let’s follow the money. Who will build the wall and other projects he has proposed, such as infrastructure improvement projects?

Government rarely builds these things themselves; rather, they contract them out to private companies. Donald Trump has involvement and influence all throughout the real estate and building industries. It’s more likely than not that a sizable portion of the government money spent on these project will find its way back to Donald Trump and his kids. Yes, there are laws and regulations against that sort of thing – FOR NOW! But who’s to say Trump and the Republicans won’t repeal them. Also, Trump has hinted at embarking on new infrastructure projects. These just might include new highways and high speed railroads that will someday provide opportunities for Trump and his kids to make money from new hotels, casinos and condos they build along their routes. Trump’s presidential ambitions may be nothing more than a veiled attempt to exponentially expand the power and influence of the Trump Empire throughout America and across the globe, while competing billionaires lusting for world domination eat his dust.

Speaking of competitors, keep in mind that government regulatory agencies fall under the executive branch and, therefore, under to power of the presidency. Trump, as president, will have the ability to write executive orders to undo decades-old protective regulations enforced by the Department of Commerce. One of the oldest political scams in the book is corporate controlled politicians changing laws and regulations in order to place competitors at a disadvantage, as the infamous Boss Tweed did for his friend and Erie Railroad owner Jay Gould in the 1860s and 1870s. Unlike Boss Tweed, Trump isn’t a politician controlled by wealthy business owners, the way most Republican presidential candidates are. Instead, he’s cutting out the middle man and placing himself directly into the seat of the world’s most powerful office. If he succeeds, he’ll be in the perfect position to exploit America’s laws and regulations for his own sake.

The world is headed in the direction of the corporate wealthy being the most powerful force in the world, rather than the nations and their democratically-elected governments having the power. The nations will be the pawns of the global corporate wealthy and will do their bidding. Perhaps the nations who refuse to do their bidding will have their economies vengefully ruined by powerful bankers and their politicians, so that “they will be unable to buy or sell” (as the book of Revelation says), unless they bow down to the Beast that is the corporate wealthy and the politicians they control. The world is already this way to some extent. But over time, the power of the corporate wealthy will grow, and placing Donald Trump in the White House just might be one huge step in that direction.