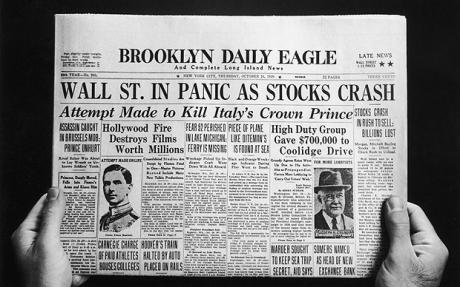 Finally, a wealthy Republican business man has said openly what I’ve suspected for quite a while. In an interview with the Globe and Mail in 2007, Donald Trump said, regarding the collapsing housing market: “People have been talking about the end of the cycle for 12 years, and I’m excited if it is, I’ve always made more money in bad markets than in good markets.”

This is eye opening news. Could Trump try to place the economy on a crash course for the sake of increasing the wealth and power of the Trump Dynasty?

It seems more likely than not.

But don’t be misled into thinking that Trump is the only industry captain to believe in this approach. I’ve believed for quite some time that the Republican Party intends for us to have these boom-bust cycles.

For example, in December of 2014, as the Republican-led House had to pass a spending bill to keep the government from shutting down, they snuck in a last minute provision that would repeal the Dodd-Frank ban on tax payer funded bailouts of banks that engaged in risky derivatives speculation. The measure had been an essential part of Dodd Frank, because the purpose of that law was to keep America from again having to bail out banks that become “too big to fail” with billions of tax payer dollars so that the economy doesn’t again collapse under a frozen financial system. The government bailed out the Savings and Loans in the late 1980s to the tune of about 150 billion dollars (about 400 billion today) and then bailed out the banks to the tune of about 800 billion dollars in 2008 and 2009.

You would think that any leaders of a nation that wanted what was best for that nation would desire to put an end to such exploitation of the American people, especially leaders who continually attract votes under the guise of opposing taxation and spending. Yet the Republicans were so eager to return Wall Street to its predatory position that they couldn’t even wait until the Democrats officially gave up their majority in the Senate come January, 2015.

The question is why?

Why do the Republicans want to set up the economy for another crash?

I believe the answer is that they prefer a boom-bust economic cycle.

Steady, continual economic prosperity with as few downturns as possible may benefit the working class. But that’s not what benefits the ultra-rich. Certainly, when an economy is booming, the rich get rich. The stock market booms. Profits soar. Dividends are paid to owners. The working class enjoys greater prosperity, and the rich enjoy the greatest prosperity. But when the economy goes bust, as it did in the Great Recession, the rich don’t suffer like everyone else. And it’s not because they have riches to fall back on.

First, the richest of the rich use the economic downturn to eat up their competitors. For example in the banking industry, there were 13 major banks before the recession. Afterward, there were 6 banks. The ones who had been the largest and most powerful to begin with effectively doubled their share of the industry as a result of the recession. Now as the economy picks up, they will earn at least twice as much this time around. The same goes for Trump. He expands his piece of the market pie when the economy contracts, and then when it expands again, he makes even more than before the crisis.

Second, businesses can buy capital at fire sale prices during an economic downturn. Prices of equipment fall when smaller competitors go out of business. Commercial property drops in price as well. For those who are well-prepared for the recession, the weak economy is simply a buyers’ market.

And finally, every economic crisis pushes wages lower, and they never quite recover. This happened in the late 1800s. The 1870’s depression was followed by the 1880’s recession and then the 1890’s depression, and wages fell further each time. Every time there’s high unemployment, workers competing for jobs have no choice but to accept lower wages, and employers are more than happy to offer them. By the 1890s, the workers wore so impoverished that the Democratic Party embarked on an entirely new course under Christian preacher William Jennings Bryan, known as the Progressive movement, which sought livable working conditions and pay for employees.

The same is true in recent decades. We saw household incomes increase by 62% in the 30 years following WWII. But the recessions of the mid-1970s and the early 1980s pushed wages down, and a lot of people never recovered. Then the minor dot-com recession of 2001-2002 set wages back a little more before the Great Recession knocked them back even further. It’s quite likely  the corporate wealthy realize that with each recession they impose upon us wages will take another blow from which they are unable to recover. Recessions allow them to exploit the American people, something the Republican Party has been doing for them since the 1870s.