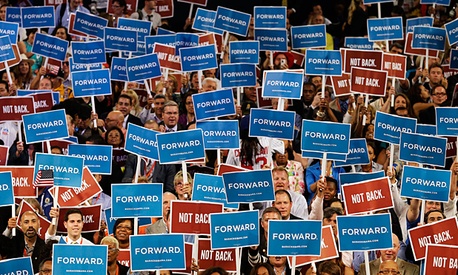 At the core of conservative political thinking, both Republican and Libertarian, is the idea that our democratically-elected government does far more harm than good. Conservatives say the government that governs least governs best. My short response to such statements is to ask, “Can you name a small government country that you think is much better? Of the 35 capitalist countries that make up the OECD, only Mexico has had far fewer regulations and significantly lower taxes than the United States.”

There’s a reason that small government breeds misery. And that reason is that small government doesn’t protect people from the life-ruining effects of corporate greed, nor does it provide the services and stability that the free market cannot. A strong democracy is the best system humans have come up with so far. Here are some examples of the good things our strong democratic government has done. I’m sure you can think of many more examples that one could add.

Prevent Depressions – I’ve already covered our nation’s depressions, and I’ve pointed out that we haven’t had any since we modified capitalism in the 1930s. That’s not to say potential for depressions hasn’t been there. On October 19th, 1987, the U.S. stock market lost 22.68% of its value, the biggest single day drop in American history.  This time, however, the Federal Reserve lowered the Federal Funds rate and injected liquidity into the market to help the market rebound.  Not having to worry about maintaining our nation’s gold reserves, the government could actually help improve the situation, unlike in the supposed good old days of small government and the gold standard.

Preserve nature for our enjoyment – When I visited Yellowstone National Park in 2012, I took shelter from a thundershower indoors one day and found myself face-to-face with an exhibit on geothermal wonders around the world in such places as Iceland, New Zealand, and Russia. I was shocked to learn that many of these marvels of natural beauty had been transformed into ugly industrial sites in an attempt to profit from their thermal heat. Had Yellowstone been located near 1800’s eastern industrial sites, it likely would have been ruined, too. Its remote location allowed it to hang on until America could come to its senses and preserve it. Likewise, the only reason the great sequoias of California avoided annihilation by the logging industry was that the trees are brittle to the point that they break apart when falling to the ground, making them useless for lumber.

I’ll admit that I make more use of the national parks than most Americans, and I literally thank God that I live in a country that preserves the wonders of God’s creation rather than in a country that empowers those who love money to destroy them or limit the enjoyment of them to the wealthy few.

Break Time & Lunch Time – In late 1800s, textile mills fined workers for eating on the job, sitting down, washing hands, and getting a drink of water.  Fortunately, “we the people” voted for politicians to require lunch breaks, sick time, family leave time, etc., in the workplace; and we’re all better off for it.

National Weather Service – While their weather forecasts aren’t always accurate, they’ve done a lot to help us prepare for hurricanes, snowstorms and tornados. Many lives have been saved. Republicans don’t like the fact that they share their research with Americans for free, however. That’s why Republican 2012 presidential candidate, Rick Santorum, sponsored a bill to deny the NWS the right to supply the public with free weather data and require that they only share it with private companies. This is yet another example of Republicans manipulating government to enrich their corporate supporters.

Water Supply – Private water management just doesn’t work. Owners of lakes, dams, and irrigation systems can be financially persuaded to share water with some businesses while denying it to others. Only a public water supply can ensure water for everyone at a reasonable price.

40 hour workweeks and overtime pay – The Fair Labor Standards Act of 1938 created the 40 hour work week. It requires that those who work more than 40 hours receive overtime pay. Unfortunately, many employers today get around this law by paying low income professionals by salary rather than by hourly wages. They can then force the employees to work extra hours without paying them any extra money.

How does working many hours let Christians serve God?

It doesn’t. Salary slavery, as I like to call it, is a roadblock to Christian living. Religion isn’t just belief; it’s action. We can’t take that action if we’re enslaved to our jobs. We can’t exercise freedom of religion if we spend most our waking hours creating wealth for the wealthy. Long work hours reduce our church and community involvement and minimize our personal relationships. God designed us for these as well as for work. A work-dominated Christian life is hardly a Christian life at all.

Building codes – As a graduate of Boyertown High School, I have to mention the Rhoads Opera House fire of 1908 in Boyertown, PA. As a result of poorly marked exists (in a dark theater) and doors that opened inward toward the crowds pressing against them, 171 people died.  This is why theaters and other establishments must adhere to fire codes today. Business owners may whine about government telling them what to do with their property, but lives are more important.

Removing abandoned corporate structures – Thanks to corporate liability protection, the wealthy leave behind abandoned factories after their businesses fail. These factories crumble over time, making them dangerous and unsightly. They also serve as breeding grounds for crime. While some properties are bought and used for other commercial real estate purposes, many never are, especially those in the cities that are far from highways. Our tax money funds these clean-ups; that is, if there’s enough tax money available. Otherwise, the land is ruined for everyone.

Toxin-free food and workplaces – In 2008, approximately 300,000 Chinese infants and toddlers were sickened, and some died, from the addition of melamine to children’s milk products. Farmers often purchased artificial protein powders containing melamine from traveling sales reps.  They added these powders to the milk to stretch it while ensuring that it would pass protein quality tests. Farmers also had been adding hydrogen peroxide to milk to keep it from spoiling.  China does not have a Food & Drug Administration to regulate and inspect food production. If libertarian Republicans had their way, neither would we. The food industry would have the “liberty” to do what it wanted at our expense.

Mortgage consumer protection – For most people, buying a home is the biggest financial commitment they’ll ever make. If their lenders sneak tricky wording into their mortgage agreements, home buyers will lose many thousands of dollars. This is a complex industry, and few hard-working people have the time or even the mental capacity to read and understand the fine print and catch every possible scheme. That’s why we’ve chosen to protect ourselves by having our government pass laws like the Truth in Lending Act of 1968.

Hunting Regulations – Thanks to the NRA and the gun debate, today, most hunters are Republicans, many of whom complain that regulations do more harm than good. Yet, it’s regulations that make their favorite hobby possible. Most states, especially those with large populations, have rather strict hunting laws designed to preserve the sport. The states impose rather short hunting seasons, limit hunting firearms capacities to just a few bullets, restrict hunting to the daytime, and limit the number of a given species that can be harvested in a day’s time or in a year’s time. If hunters were permitted to mow down entire herds of deer with semi-automatics, day or night, all year long, with no harvest limit, the hunted animals would likely be on the verge of extinction within a year’s time, and hunting would cease to exist as a hobby. In other words, the greedy few would have ruined hunting forever for everyone else. And that’s generally what regulations are all about – protecting the many from the greedy few, so that everyone can share in the goodness that life has to offer.

Quieter Commercials – This may not be a lifesaving regulation, but it demonstrates the positive power of democracy. When I watch football, I like to turn the sound up a bit more than I do for other programs. I like to feel like I’m at the game. By the fall of 2011, I couldn’t do this anymore, because every time commercials aired, my television’s volume was darn near ear-splitting. Apparently, thousands of Americans suffered the same problem and complained to the FCC. The FCC then prohibited commercial volume being louder than that of regular programming, starting in 2013. A libertarian might argue that we have the liberty to not watch television at all if we don’t like loud commercials, but that’s not the ideal outcome that most Americans want. Instead, “we the people” put pressure on our democratic government to fix the problem, and it worked.

Of course, there are many other good things I could have listed, including civil rights legislation, worker safety legislation, and even the Do-Not-Call List (which gives residents freedom from harassment by eliminating corporations’ freedom to harass residents). I did not intend for this to be a comprehensive list. But I did intend for this to be a reminder that “we the people” have done so much to protect ourselves from the harmful effects of greed that few of us can fathom all of the good that’s been done. We tend to be naïve about how devastating the effects of greed can be on humanity, because we’ve grown up in a world with a protection system already in place. We then tend to imagine that our small government past was so much better than the present, when the truth is that we’re terribly ignorant of our nation’s history. And it’s that ignorance that Republican politicians and pundits count on. If we remain ignorant, the Republicans and Libertarians will, in the name of small government, dismantle all of the good we’ve fought so hard to establish.

The truth is that a democratic government structured like ours, regardless of its size, is good, not bad. If officials do wrong, we can vote them out of office. The only instances in which a democratic government becomes evil are those in which non-democratic forces control it. In Birmingham, that force was the KKK. In Ludlow, it was the coal company’s power over the state government that brought about the murder of the workers’ wives and children. In the banking fiasco of the Great Recession, it was the banking industry’s influence over government that brought about deregulations that enabled the crisis to occur. And in the future, it will have been the influence of wealthy people who have funded candidates and bought elections that cause debt doomsday – a day when our nation can no longer borrow money to pay its debt and will have to print up the money to do so, causing hyper-inflation – all because Republicans have spent decades shoveling tax dollars to the rich while simultaneously cutting their taxes.