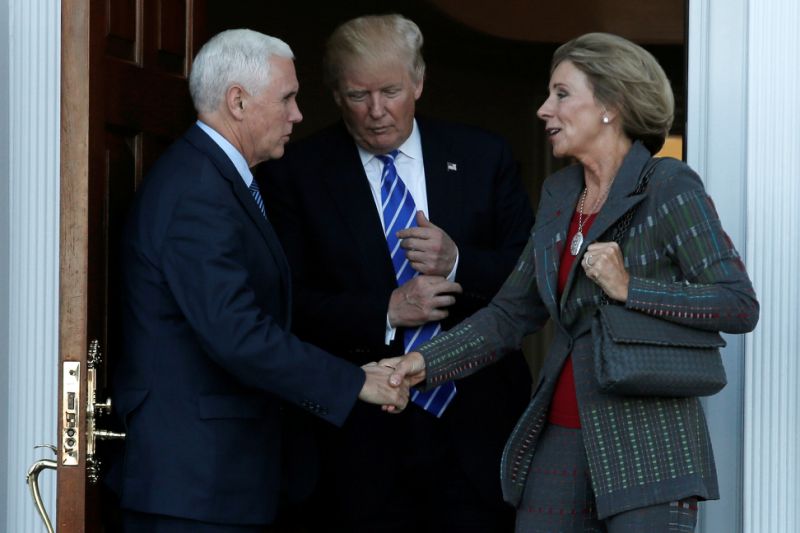 As America discusses the possibilities of a private K-12 school system, conservatives defend it by saying, “Why shouldn’t I get to send my kids to any school I want?” while liberals express concerns over discrimination against LGBT youth. But that’s just the tip of the iceberg. We need to take a closer look at how this will play out. Granted, in the short term, this will be little more than the federal government shoveling tax dollars to private schools, so they can get richer at the expense of taxpayers. But the long term goal appears to be the total privatization of the K-12 education system. Here are 10 ways privatizing K-12 schools won’t go as well as Republicans would have you believe:

1) You’ll have to pay a lot for a good school
That’s how the free market works. The schools that generate the greatest demand will charge the most. So if the school voucher all students receive is $10,000, then the worst schools will charge at least that much (because why would they pass up the free government money?). But if a really good school has a 1000 student capacity but has 10,000 applicants, then they will raise their price to the point where they maximize their revenues. So if they charge $30,000, that will drive away most applicants, but they’ll still have more than enough to fill their seats, and they’ll make an extra $20,000 per student to boot. That’s what private businesses do; they charge as much as they possibly can in order to maximize profits.  It will be no different than college, where Ivy League schools charge a whole lot more than community colleges do. The availability of Pell Grants and student loans (both of which are vouchers – money the government gives you to spend at the school of your choice) does little to make the better schools affordable.

2) Blue collar workers will be priced out of their local schools
Again, just like college, the ones closest to you aren’t always the most affordable. If you have a relatively low income and live in a suburban area that has a sizeable middle class population, you’ll be priced out of your local school. You might live a mile away from it, but you’ll have to drive your kid 15 miles every day to get them to a cheap school in a low income area. Ironically, a lot of these people are the ones that thought Trump was going to help them. This will hurt them. And they will feel the pain every day.

3) Transportation will be a nightmare
This is the part that’s different than college. You can have 3 kids in college, and they can all live on campus or drive themselves to it. But if you have a kid in elementary school, one in middle school, and one in high school, the logistics of getting them to their far away poor quality schools will be impossible. Likewise, if you’re impoverished to the point where you have no car, and your local inner-city schools are terrible, but you want to send your kids to a better school, how will they get there? There isn’t enough public transportation to do it, and public transportation is unlikely to take you all the way out to suburban schools, anyway. And are wealthy suburban schools really going to pay to send buses to the inner city just to bus in the poor kids? How does that add to their profits? It doesn’t. So it won’t happen.

4) Teacher quality will not improve
Conservatives repeatedly tell us of experiments where they give vouchers to impoverished kids to go to private school, and the kids get better grades. Of course, they do. But is it because the teaching is better?

Perhaps in the most expensive private schools it is, but many cheaper private schools have lower qualification standards than public schools, just like colleges that employ adjunct professors who have no teaching background. The real reason impoverished children do better at private schools is because being there takes them out of their impoverished environment. Their peers at private schools have a better attitude toward learning, because private school students come from wealthier families that emphasize education more than working class families do. Wealthier families provide a better home study environment and are more active in their children’s education, even before they start school, while low income families tend to leave it up to the schools to educate their children (for more on this, read “Outliers” by Malcolm Gladwell).

Under a fully privatized K-12 system; however, the notion that private schools have better teachers or more enthusiastic students falls apart. Because if you give vouchers to the entire country, then every school will be a part of the voucher program and so will every teacher and student, and that includes the worst teachers and worst students. Ultimately, the best teachers and learning environments will be at the most expensive schools, while the worst teachers and learning environments will be at the schools who charge the voucher rate.

5) Segregation will increase
What made the public K-12 education system one of America’s greatest achievements was that it gave equal educational opportunity to Americans of all economic classes. Many of us grew up with classmates who wore hand-me-downs to school every day, while other kids got new clothes once a year, while some were wealthy enough to always wear the latest designer fashions. A private school system will cause each school to consist of one economic class. The poorest kids will be together in the voucher–priced schools; the middle class kids will go to the schools that cost a bit more; the wealthy kids will be in the expensive schools; while the richest kids will continue to attend the most expensive schools.

And it will not end there. Christians will occupy the Christian schools, while Muslims occupy the Muslim schools, etc. Private school will make society more segregated than ever, making it harder for people of different classes and religions to empathize with one another. If you’re worried about America being divided, don’t privatize education.

6) Paying for school won’t make your kids study harder
Privatization proponents often say, “If parents have to pay for their kids’ schooling, they’ll put pressure on them to study harder.” First, how is that working out at the college level? Do students refrain from partying instead of studying, because their parents are paying for it? Granted, K-12 students will usually live at home, but if they have a bad attitude toward school, it’s unlikely they’ll be eager to please their parents. Second, such an answer implies that parents will have to pay for school out of their own pockets, in addition to the voucher, leaving low income families to bear more of the burden, which is what Republican policies often seek to accomplish.

7) It won’t make America more Christian
If you’re not looking to make America Christian, this is good news for you. While much of America is just starting to consider the effects of privatizing K-12 education, conservative evangelicals have been pushing for it for decades. They prefer private schools, because church and state separation prohibits the teaching of any one religion in public schools. They seem to think that if we could just put God back in schools by privatizing them (so the church/state separation no longer applies), America would become a God-fearing country, rediscover its morality, and that would somehow solve our problems. Again, how is this working out at the college level? There we see the proof that if there’s money to be made in education, it won’t just be Christians making it. Wealthy people of all or no faiths want a piece of that pie, too. Most colleges don’t teach Christianity, and most private K-12 schools won’t teach it, either.

8) It will cause local school shortages
Let’s say 60% of the students from an impoverished city high school go elsewhere. Then the cost of keeping that school open will be prohibitive. It will go out of business, just like a big restaurant that doesn’t attract enough customers. Then the 40% who remained at that school will have no place to go if other schools in the area have no vacancies. The reality of the free market is that businesses go out of business. Granted we don’t see that happening as much at the college level, because of the growing need for higher education for the sake of employment. But at the K-12 level, there is little growth in the need for it, since everyone already attends, so we can expect that some schools will go under due to lack of students, leaving the students without a school, at least for one year.

Of course, it’s illegal to not attend school, so the government will have to make K-12 attendance optional to keep the truants out of jail. But, hey, that won’t mean they’ll have nothing to do. In 2012, Newt Gingrich proposed giving kids under 16 the “freedom” to work; Republicans oppose the minimum wage – making child labor cheap; and they want to cut food stamps – giving poor kids the motivation to work for their food. Privatizing K-12 is one of four steps – all supported by conservatives – that can bring back child labor from the Gilded Age. That may sound far-fetched, but history has a way of moving much faster than we expect.

9) Millions of U.S. students will lack basic knowledge
Over the past decade, the right-wing media has effectively created its own alternate universe. Scientific data on pollution’s impact on climate has been suppressed. Numbers indicative of our economic recovery have been denied. America’s darkest days – from slavery and civil rights abuses to the worker oppressions of the Gilded Age – are no longer discussed. And this is all because they seek to advance the agenda of the global corporate wealthy – an agenda that has proven to be terribly oppressive for the majority of the population wherever it’s been tried. A private K-12 school system will consist, in part, of right-wing schools. And those schools will suppress and twist information that nearly all of us grew up learning as facts that no reasonable person would dispute. There was a time when the vast majority of Republicans and Democrats sought truth and merely disagreed upon how to fix real problems. Those days are gone. Now millions of American children will be raised on lies and propaganda much like children of the old Soviet Union were. I never imagined that could happen here, but a private K-12 system will most certainly assure that it will.

10) Republicans will someday cut the vouchers
As I stated earlier, Pell Grants are effectively vouchers – money the government gives you to spend at the school of your choice. In the 2012 presidential campaign, Republican vice presidential candidate Paul Ryan repeatedly stated that he wanted to abolish Pell Grants for over a million students, and he included those cuts in the Romney-Ryan budget. And at the same time, he wanted to cut taxes for the wealthy, as Republicans always want. So we can see where this is going: Republicans will privatize education while claiming that it won’t hurt the poor, because of vouchers; but someday, when they’re looking to get their latest budget cut fix, they’ll take those vouchers away, abandoning the lower class, just like they do with regard to hunger, housing, and healthcare